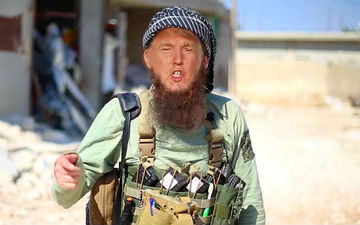 “I found a birth certificate for Trump, I thought he was born in Shaboinkin, New York in 1946 but this thing told a different story. Trump’s real name is Anwar al-Siddiqui and he was born in Khartoum, Sudan in 1945. It was only after his parents moved to New York in 1956 that he was given a new name — Donald Trump,” Guttierez Silvera, told the Washington Telegraph.

There have been other clues to Trump’s real allegiance, for example no one has ever seen Trump in a church.

Harold Wheatgrass, a long time neighbour of Trump says that even though his family goes to church every Sunday, Trump has never even set foot inside of one.

“I asked him and his family if they would like to attend church one Sunday. He went white as a sheet and his tuft rose up. Then I heard him uttering some Arabic under his breath,” Wheatgrass said.

You become what you hate the most

So, how does this revelation explain Trump’s recent call to ban all Muslims?

“That’s actually a call to prayer. He’s singling out Muslims because he wants them to wage Jihad on America once and for all. How do you do that? Not by being nice to them, it’s a call to arms and he knows it will make more terrorists than anything. Can’t you see folks, Trump is working for the Muslims because he is one himself. It’s right there in front of our eyes,” a Capitol Hill insider revealed.

Fox news even had Ann Coulter on the Hannity show in December saying that when she met Trump, he kept a mat around at all times.

“I asked him what the mat was for. He said he likes to lie on it sometimes and every few minutes Trump would disappear to a room and I would hear Arab words, you know those devil Islamic prayers they all do. I swear I heard it with my own ears, as my Adam’s Apple is real, I swear I heard right. Trump is a goddamn stinkin’ Muslim!”