“Michelle is a strong black ‘woman’. I’ve seen her reduce grown men to tears just by looking at them or whispering something quiet in their ear. She is the woman who controls Barack and he is the dude who does what he’s told or let’s just say they’s gonna be troubles,” Latoucha Maples, an old acquaintance of the Obama’s told Fox News for an expose which will be aired Thursday after the inauguration.

Born and raised in Chicago, Illinois, Michelle first made a name for herself as a ‘female’ athlete in the Shiboinkin Women’s Muscle group down in the South Shore community area of Chicago.

“I knew she was special when she lifted a dumbbell with her pinky finger and tossed it in the air like a pancake. She had an anger that was deep inside of her but that’s what drove her like no other. That Fall, she won three bodybuilding contests and was tipped for overall championship. That’s when disaster struck,” Al Rankin, senior trainer at the Shiboinkin Women’s Gym recalled in the documentary.

Yes, you guessed it. Michelle met Barack in 1991 at one of her competition muscle contests, they say it was love at first fight.

“Barack was at the competition with some of his pals having a laugh at Michelle doing her tensing and posturing on stage. She did not find that very funny and actually jumped off the stage in a fit of rage and slam dunked Barack Obama into his own chair. He was like a ragdoll and putty in her arms. They started dating soon after and were married in ’94,” Corey Johnsons, an old Obama friend recalled. 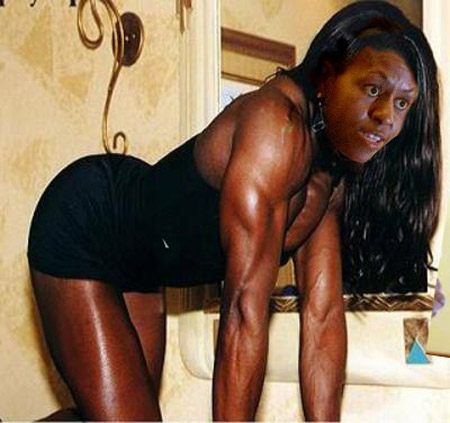 Michelle Obama during her competition years

Michelle Obama’s temper is legendary and was even witnessed by some on the election tour bus in June 2008.

“Michelle would make Barack recite his speeches and if he got a word wrong or fluffed his lines she would slap his head from behind. She had this look in her eye that told us she meant business. At one point Barack was caught looking at an intern. She quashed that one quick. There was not going to be any Clinton-itis going on,” John Resnick, a campaign journalist reported on CNN at the time.

Barack Obama’s inauguration was a historic first in American history. He did not fluff his his lines for a reason, there would have been hell to pay afterwards.