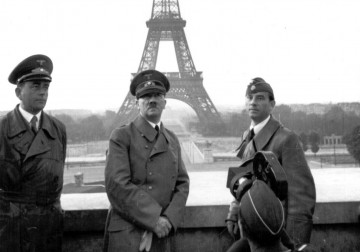 As an artist, albeit a failed one, Adolf Hitler understood the aesthetic beauty of the Parisian city and this is why he spared the architecture, from the art nouveau, art deco, the Renaissance, Baroque and Rococo façades, the splendour of the Grand Palais, to the Opéra de Paris, all moments in time captured in intricate detail. Master craftsmen made these monuments as a shrine to their genius and the French desire for displaying aesthetically pleasing symmetry.

Hitler rode into Paris on June 28 1940 after the French surrender, and he undertook a tour of his brief conquest with his chief architect Albert Speer.

“Three days after the beginning of the armistice we landed at Le Bourget airfield. It was early in the morning, about five-thirty. Three large Mercedes sedans stood waiting. Hitler as usual sat in the front seat beside the chauffeur, Breker [a sculptor] and I on the jump seats behind him, while Giessler [an architect] and the adjutants occupied the rear seats. Field-gray uniforms had been provided for us artists, so that we might fit into the military framework. We drove through the extensive suburbs directly to the Opera, Charles Garnier’s great neobaroque building. . . . It was Hitler’s favourite and the first thing he wanted to see. Colonel Speidel, assigned by the German Occupation Authority, was waiting at the entrance for us.

“The great stairway, famous for its spaciousness, notorious for its excessive ornamentation, the resplendent foyer, the elegant, gilded parterre, were carefully inspected. All the lights glowed as they would on a gala night. Hitler had undertaken to lead the party. A white-haired attendant accompanied our small group through the deserted building. Hitler had actually studied the plans of the Paris opera house with great care. Near the proscenium box he found a salon missing, remarked on it, and turned out to be right. The attendant said that this room had been eliminated in the course of renovations many years ago. ‘There, you see how well I know my way about,’ Hitler commented complacently.

“He seemed fascinated by the Opera, went into ecstasies about its beauty, his eyes glittering with an excitement that struck me as uncanny. The attendant, of course, had immediately recognized the person he was guiding through the building. In a businesslike but distinctly aloof manner, he showed us through the rooms. When we were at last getting ready.to leave the building, Hitler whispered something to his adjutant, Briickner, who took a fifty-mark note from his wallet and went over to the attendant standing some distance away. Pleasantly, but firmly, the man refused to take the money. Hitler tried a second time, sending Breker over to him; but the man persisted in his refusal. He had only been doing his duty, he told Breker.

“Afterward, we drove past the Madeleine, down the Champs Elysees, on to the Trocadero, and then to the Eiffel Tower, where Hitler ordered another stop. From the Arc de Triomphe with its tomb of the Unknown Soldier we drove on to the Invalides, where Hitler stood for a long time at the tomb of Napoleon. Finally, Hitler inspected the Pantheon, whose proportions greatly impressed him. On the other hand he showed no special interest in some of the most beautiful architectural works in Paris: the Place des Vosges, the Louvre, the Palace of Justice, and SainteChapelle. He became animated again only when he saw the unitary row of houses on the Rue de Rivoli.”

ISIS, has no such appreciation of high art, sculpture, architecture, or the field of creativity, and it is to this end that their targeting of Paris is one that threatens more than even Hitler.

For them, they would easily with no qualms demolish Jean Chalgrin’s Neoclassical Arc de Triomphe with a tonne of semtex, or lace the Gothic masterpiece of the Notre Dame with even more semtex reducing it within a few moments into a pile of smouldering rubble.

Hitler’s architect, Albert Speer tried to emulate some of the magnificent city planning we see in Paris still standing today, and although he was a genius in his craft, he could not come close to Haussmann’s legacy.

This is why Paris must be protected with the utmost determination, as the people are resolute, the architecture is irreplaceable and to have open borders within a Schengen system is an invitation to destruction. Schengen is now simply a free flowing channel to certain annihilation, it allows anyone whether they are a highly trained terrorist or not to enter Paris, the true heart of mainland Europe, and wreak destructive havoc as they have done to the Middle East.