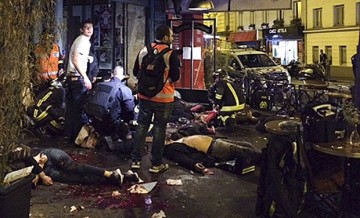 “We need to build a military society, increase spending to all military units by 80% and bring in a full draft for all citizens from 18-35 to defeat ISIS,” a man in a Parisian street told a crowd to many cheers.

The population is now ready to fight, they are sick of seeing daily reports of killings and needless murder, and now is the time to seize the onus on the atrocities taking place day in day out and bring in a draft for all citizens.

Military spending in France is a paltry 53.1 Billion dollars per annum which is a measly 1.8% of France’s GDP as of 2015.

Contrasting the current military budgets, welfare budgets for France are 32% of GDP and Britain’s massive welfare bill is 24% of GDP according to the OECD. These are ridiculous sums of money to be wasting when they could be spent on military technology, training, weapons and soldiers.

With these pathetic military spending numbers leaving key European countries begging for attack in a time of war, there is no option but to do something fast to increase military expenditure or most of Europe will be defeated in less than five years time.

The military draft should replace the benefits and welfare system where taxpayer money is poured into an endless black hole never to be seen again resulting in a weakened population. It will give the citizens a purpose, especially those who are in their youth and with nothing to do but go on benefits.

Western Europe must think of these key issues now or in the future their cities will be even more defenceless to attack. Citizens within Europe and the UK must also be allowed to bear arms, as an unarmed citizenry is a liability to the inner security of any nation.

If you are a French, British, European citizen and want to make a difference, you can join the military now. If enough people start joining, maybe the sleeping politicians who are turning a blind eye to the real problems of the globe will wake up. Bombing from afar will not do anything, we need boots on the ground, but first we need to be prepared.

“The commander must decide how he will fight the battle before it begins. He must then decide who he will use the military effort at his disposal to force the battle to swing the way he wishes it to go; he must make the enemy dance to his tune from the beginning and not vice versa.” — Viscount Montgomery of Alamein

The West is far behind, whilst the youth are mollycoddled, spoilt, there are ISIS children being trained to kill Westerners and have adopted a military society. Unless the West pushes back, they have no chance in the future as ISIS gains strength every day without boots on the ground.