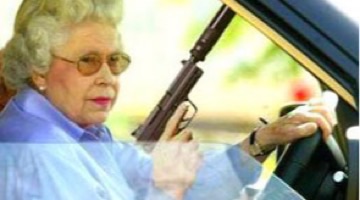 One does not insult the Queen of England and get away with it easily, as Jeremy Corbyn, the anti-royal new Labour leader is finding out.

“I’d just got off the privy, poh, it was a smelly one, as I parted the curtain to open the window I saw her, she was scouting the area, that’s when a chill went up my spine, I was now on the list!” Corbyn told the BBC.

There have been no confirmed reports from any other news source or Buckingham palace, but if Jeremy Corbyn is not hallucinating or being paranoid, he better watch out, you don’t mess with her majesty.