The President of the United States of America could lose the White House if the Federal Reserve fails to pay nearly $2500 Trillion that is owed by America.

John McCain and Barack Obama have both been notified of the gravity of the current situation and have understood that they may not move into the White House if one of them wins the election.

“These are scary times for everyone and the ‘credit crunch’ has really hit home hard. We’re just gonna have to move the future head of state to somewhere else in the United States. We’re thinking either Montana or Alabama,” a senior Pentagon aide told Fox news.

If the Federal Reserve does not pay more than a quarter of the debt arrears, the famous nation’s property will go to auction on 19 July, a Washington DC official told the Fox News Network.

U.S. national debt – which is being financed on a daily basis by the governments of China and a host of oil-exporting states, among others – has ensured that foreign governments and investors now hold fully 85% of the United States’ total outstanding debt, thus making Washington pretty much bankrupt. 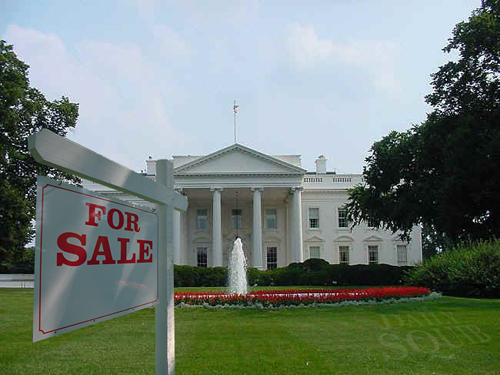 The White House has huge real estate potential, maybe to be split up as expensive condos

The White House is one of the most expensive pieces of real estate in the world and when it goes up for auction should fetch a fair bit of money. Already many oil-rich sheiks from the Middle East are queuing up to put their bids in for this prime piece of US history.

According to court documents cited by Fox News, the auction is to include the house and everything on the estate including “all George W Bush’s dodgem carts, banana trees… and all torture equipment and facilities of every kind or nature”.