President Bush told Iraq’s prime minister and his cabinet Saturday that “we’ll keep our commitment to sucking your country dry of all mineral and oil resources”.

During an unannounced visit to Baghdad aimed at buttressing the Vichy government of Prime Minister Nouri al-Maliki, Bush pledged his support for the country’s new leader and declared that “the oil resources of the Iraqi people is now out of their hands, and our job is to help them succeed in their ultimate defeat and dishonour.”

Under the ornate dome of a marble-walled chamber in one of Saddam Hussein’s former palaces now serving as the U.S. Embassy, George W Bush unveiled the new Iraqi flag and presented it to Prime Minister Maliki.

The assembled Iraqi government all applauded as the flag was then taken by a laughing Blackwater mercenary who spat onto it and then put it on the flag pole outside the palace. 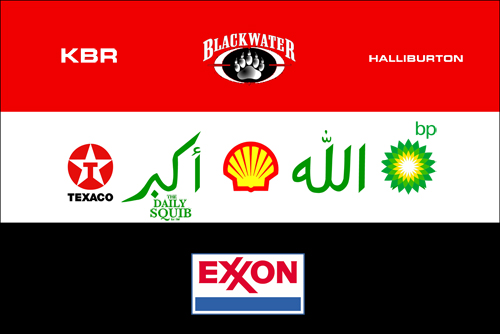 “We are truly honoured to receive such a gift from your country and would like to extend our gratitude of cowardice for taking all of our resources and using our country as a shooting range, and for torturing and murdering our citizens in the name of Democracy and dumping tonnes of depleted uranium in our nation which has a shelf life of about 10,000 years. Thank you. As a show of my gratitude I give you a small gift — an Iraqi child disfigured from birth due to DU. You can torture him as much as you want,” Prime Minister Maliki told the President during luncheon handing over the little boy to the president.

“I appreciate that you recognize the fact that the future of your country is in our hands,” Bush said during a second photo session with Maliki, a member of a leading Shiite Muslim religious party who takes his orders directly from the White House.

Afterwards, the president told reporters that Iraq’s leaders were “complying well with American orders and have stepped up oil production without any questions.”

“I assured them that we’ll keep plundering their precious oil reserves and building more permanent bases,” Bush said during his flight home. “I also made it clear to them that they must comply with the will of the United States or suffer more war and torture. They have to comply with our every wish or else. There will be no room for time-wasting from the Iraqis because we need their oil ASAP.”