Tower Hamlets Councillor Dave Howitt has hailed the new CCTV Tripod scheme as a “jump into the future.”

“These Mobile Monitors will be able to move anywhere independent of all obstacles or pedestrians. They will be operated by our control centres in Coventry and Wolverhampton. A truly cost effective and efficient way of monitoring people.”

The mobile CCTV tripods have been developed by a UK company called 1984 and will be rolled out cheaply to councils across Britain within the next year.

“This is the next stage in our Labour manifesto. We already have the largest number of static CCTV cameras per citizen in the world. Britain is the most surveilled country in the world and even during the Soviet era of Russia and Stalin’s day they did not have as much surveillance as we have now,” a proud official for the council told us.

There are still some areas of Britain that cannot be surveilled and these new mobile CCTV units will fill the gap that the 45 million static cameras cannot.

The Mobile Surveillance units will be able to telescopically increase their height by 40 feet as well as reduce their height to 3 feet. Fitted with hi spec camera lenses, they can zoom into an area from half a mile away. The units will also be fitted with a tannoy address system to speak to citizens.

The mobile surveillance units are run on state of the art fuel cells and need only to be charged once a year. 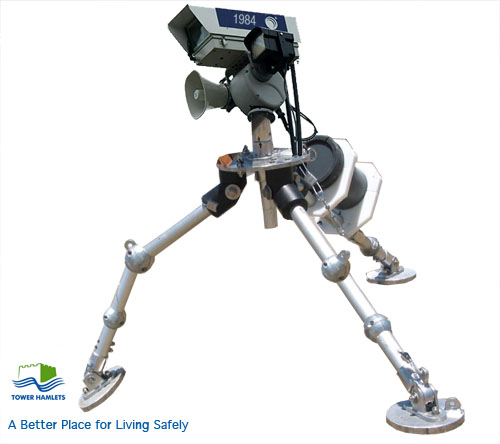 “If you drop a piece of litter, the cameras can detect this from half a mile away and will radio for help so that the relevant Stasi official can issue a fixed penalty notice onto the miscreant,” Councillor Dave Howitt added gleefully.

Labour also plans to increase monitoring of people in their homes by 2010 with an increase in home CCTV and bugging surveillance.

A draft white paper has already been proposed in Parliament to increase funding to the Home Surveillance Branch which was set up by Prime Minister Gordon Brown last year.

The cost to the taxpayer for the mobile units is negligible and a recent government operated MORI poll showed that 99% of the British population approved of the increased surveillance on themselves.

“I’m like all other English people. When the Labour Government asks me to bend over and take it, I do. We’re now the most downtrodden, overtaxed, surveilled people in the world and it makes you proud to be British, dunnit?” Joe Burke, 43, who is a resident of Tower Hamlets, told the Daily Squib.

Unelected leader Gordon Brown, who was recently on a trip to China, wowed the Chinese PM with tales of how he has acheived the massive Draconion shut-down of all privacy in the UK.

Communist China still has a long way to go until they get to the British level.