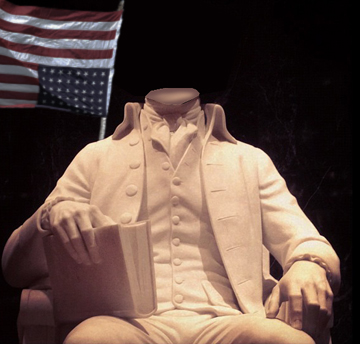 Before Barack Obama was elected, the Daily Squib urged him not to take the bait. We knew that he would be elected but we also knew that this man from nowhere would also be the scapegoat, the tricked fool and the ultimate fall guy, not only because he was black, but because his masters controlled him so well.

America today is a mess, a country in deep distress, with debts racked up on bogus stimulus initiatives, leftist vanity projects that serve no purpose, and a population so deeply divided that the atmosphere resembles the months leading up to the American civil war, there will be no immediate cure for this sick patient as it has suffered indignity after indignity at every turn under the last two presidents.

The realised deficit is now at $21 Trillion, the unrealised tax liabilities are at $125 Trillion. The money printing buffer zone is gone, and unless the U.S. starts printing more fake money soon, people will tear each other apart in the streets when they realise the gravity of the situation they and the country are in. The rows and rows of soulless McMansions will be literal prisons for their residents, barricaded in, keeping away the angry mobs and torch bearing disenchanted.

“The people are mostly asleep, they may get little inklings here or there that something is wrong, but they will put that back and get on with their daily useless lives. This why the NSA have been so desperate to tap into the mind of the people by logging their every conversation, they want to know if people have woken up to what is happening, luckily the population is still unaware and still drunk on their soma for the masses fed to them daily,” a Capitol Hill source revealed on Wednesday.

Socialism kills economies, and Barack Obama has done a beautiful job of bringing America to its knees, the blind leftists too drunk on their Soviet rhetoric and brainwashing via their daily twitter fixes of outrage and PC centric mind control may think they are clever but they are sheep being led to the slaughter, and anyone who voted for Barack Obama TWICE, should hold their heads in abject shame and remorse, but they won’t, because they are too unintelligent and deluded to realise their folly.

What happens in the U.S. will invariably affect the U.K.

It doesn’t matter though, eventually, some time soon, the walls will be breached, as in all movements and mass popular action, once a few people wake up, they are like beacons, and the wildfire spreads culminating in an ultimate life changing form of realisation. They’re waiting for you though, and they know who you are now.