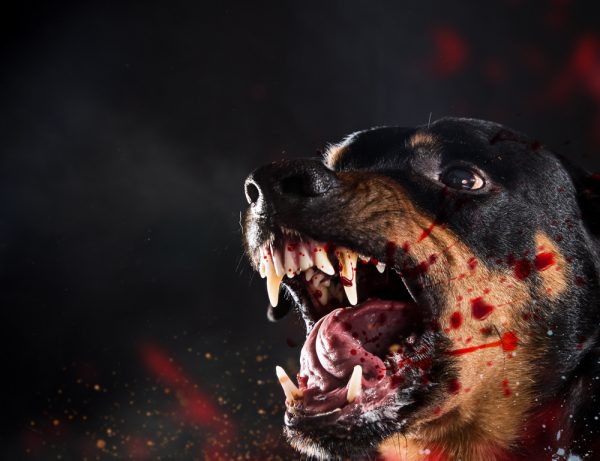 The National Office of Statistics is studying data that suggests the frequent Rottweiler attacks on poor white low class unemployed people in England and Wales has decreased by a remarkable 0.8% for December 2007.

The fatalities and severe injuries sustained by attacking Rottweilers was a mere 345 for this month so far and the minor drop in maulings on Chavs is a cause for concern for other populations of the UK.

Rottweilers and Pitbulls are a breed of dog kept specifically by ‘Chavs’ and is nature’s way of keeping Chav population numbers at acceptable levels.

These guard dogs are not bred to be kept in a council flat or other restricted spaces, but need to be kept within large open spaces and to be trained adequately with plenty of exercise. It is no wonder that under the idiocy and ignorance of a Chav owner these dogs lose their minds.

Only Chavs are stupid enough to keep dangerous dogs like these in confined spaces and homes, with very little or no human contact. It is this profound stupidity that also ensures the Chav population is kept in check with daily maulings and fatalities.

Whether it is stabbings or shootings, poor diet and low quality lifestyle which ensures permanent early retirement for the Chav population of England and Wales, the added bonus of Rottweiler attacks also adds to the decrease in the Chav numbers.

Owning a Pitbull or Rottweiler is a badge of honour for Chavs, much like an ASBO or a conviction for GBH.

The increase in the Chav populations in the British Isles over the past ten to fifteen years has ensured a steady increase in attacks on their numbers by the dangerous dogs.

“There should not be a crack down on Rottweilers or Pitbulls by the Government. Breeders of dangerous dogs should be encouraged to carry on supplying these dogs to the Chav population,” John Humphreys of the League for the Preservation of Killer Dogs said from his kennels in Hertfordshire.

The increase of attacks on Chavs also relieves the burden on NHS resources and the benefits system as well as reducing policing costs. The resultant lessening tax burden is an additional bonus to the increase in Rottweiler dogs within Chav populations.