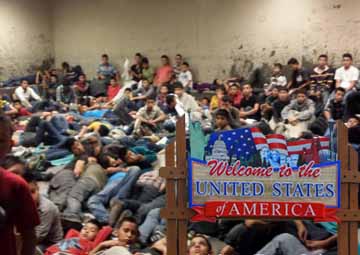 America has always been a white Christian led entity but thanks to President Obama, those days are now in the past, and the president’s plan to flood the country with millions of South Americans is a death knell on the Conservative overall plan for America.

“From the inception of America, whites have always had the upper hand, this strategy was proved quite succinctly with the annihilation of the Native Americans in one of the world’s largest genocides ever recorded. Where the constitution always claimed freedom and rights for everyone, this was clearly not the case as white Americans ruled everything, from politics, to business, to films and all forms of entertainment. This is why Obama is now flooding the country. You will not see so many white faces any more, just brown and black. Where white Americans have stopped breeding, the others will breed like rabbits increasing their populations at a momentous rate. This is the end of the Republican nation, as they will not have any support for their party in future elections. That’s when we come for the guns. The population will be so fractured and indoctrinated in anti-gun sentiment that it will not even raise a yelp,” Democratic senator, Earl D. Wayne told CNN on Monday.

The final bell has tolled for conservatism in America.