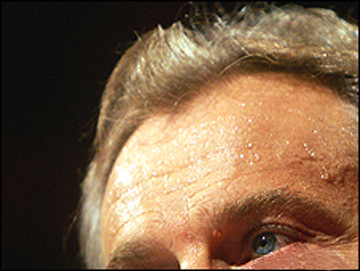 A visibly sweating Tony Blair has emphatically denied that he has any knowledge of torture practised by the UK and US during the War of Terror.

“I have no idea what you are talking about and refuse flat out to even answer any questions regarding the subject of torture or Rupert Murdoch’s former wife. I do not even know that woman and have never met her even once while Rupert was away on a business trip,” the former prime minister told a tribunal hearing.

Home Office secretary, Theresa May has ordered Tony Blair to be waterboarded until his memory comes back.

“Well, well, well, if he won’t admit it under normal conditions, maybe if we jog his memory a little. How about a bit of waterboarding or some electric shock treatment on his testicles? I have ordered Mr. Blair be detained in a secret location where he will be tortured until he admits the heinous things he has been up to.”