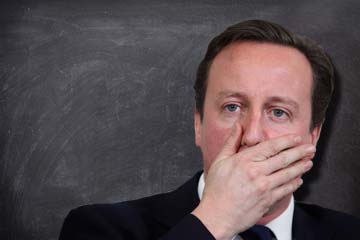 The PM’s press officer always lends a hand by bringing out a little black board for him to put forward his message with some pieces of chalk.

“It’s not that he doesn’t want to say anything, it’s just that what he says is sort of meaningless and transparent, almost like some kind of insipid jelly fish,” Peter Pesseltripe, Cameron’s press officer told the Telegraph.

David Cameron’s latest speech about EU immigration was thus reduced to a few scribblings on the board.