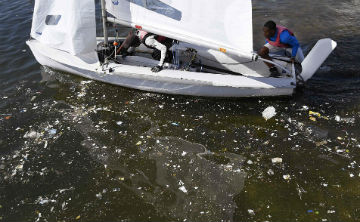 The Angolan sailing team got off to a fanciful start when one of their sailors fell overboard with his mouth open. During the rescue attempt he had swallowed three used tampons, a diarrhoea filled nappy, a used condom and a large floating turd which had just been flushed.

Igonumu Akata, 34, a three time bronze medallist was conscious when brought on board but sadly died ten seconds later.

The raw sewage pouring into Guanabara Bay where the triathlon, sailing and marathon swimming events are taking place contain so much bacteria that even mild skin contact can mean serious infection.

“If you swallow the water you die. It’s really that simple,” said Australian Olympic triathlon athlete, Miles Dunbarr. Unfortunately after making his comment he was found floating in the sewage lifeless.

Brazilian Olympic officials have downplayed the concern for the swimming and sailing events by simply ignoring there is a problem of raw sewage.

Jaeieo Baiaiaiaiae, said: “In Brazil we are used to swimming in raw sewage. Given time, these athletes will get used to it too. We drink and swim in the water, there is no problem. Eventually you get used to pissing out of your anus with projectile diarrhoea.”

So far on the first day of events, 34 athletes have died, and 120 are in intensive care.