The capacity for the Beijing Olympic pool may have to be increased from 300,000 to 575,000 athletes to accomodate the Chinese swimming contingent .

This increase in capacity has not however taken into account teams from the rest of the world attending and may be upped by a further 12,000.

Olympic diving teams will also have more room to manouvre.

“It’s not easy diving into a pool from 30 feet up with 45,000 people already in the water,” exclaimed Xiao Xing Xang Xong, who is the great medal hope for the Chinese diving team.

Last week three Olympic divers were severely injured when they dived into the pool and hit other swimmers. Thankfully there have only been five deaths in the last month, and the sheer number of swimmers compensates for any inevitable losses.

“Have you ever been in a pool where the urine slick from 60,000 swimmers goes up your nose or in your mouth? I have and it ain’t pretty,” American three time gold medallist Brad Rebo who was attempting to train at the Olympic facility yesterday told the Daily Squib. 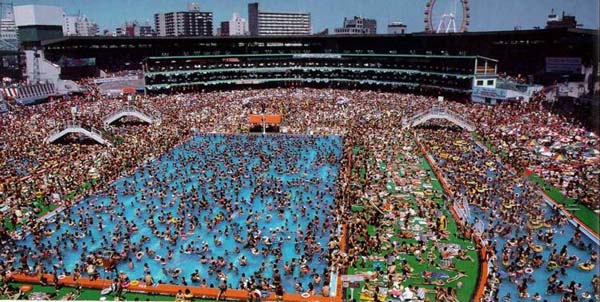 Yesterday in Beijings thick atmosphere full of heavy lead particles and phosphates, there was a mild show of discontent from some of the Chinese athletes on the

issue of overcrowding but the protest was nipped in the bud with the savage beating and imprisonment of the protestors from the assembled Chinese Olympics police force.

There have also been concerns over the chemical content of the Chinese Olympic pools.

A swimmer who tested one of the Olympic pools yesterday had to be hospitalised after dipping his toe in the water only to see it dissolve into nothingness in front of everyone. The distraught swimmer was stretchered off and may have to miss the Olympics all together.

Testing has now begun to resolve the chemical content of all the pools, obviously the chemicals will not be tolerated by other nations participating in the games and Chinese party leaders are racing to decrease the chemical pollution of all of its water supplies to the pools.

“If swimmers from other nations perish in the toxic waters it will not look good for our nation,” a Chinese Oympics official told the Daily Squib.

Most water supplies in China are contaminated with raw sewage so there is no choice but to have huge amounts of toxic chemicals in the water which of course increase pollution levels further.

The 29th Olympiad that is coming up this August in Beijing will be a major test for many athletes because of the adverse polluted conditions they will have to deal with.

The marathon and cycling routes have also come under fire for not being wide enough.

Gert Blatters from the Olympic Standards Board had some reassuring words to say in the Olympic village: “There is nothing to worry about. Everything is under control.”

Mr Blatters has since been taken ill with severe toxic poisoning after drinking some bottled water at the news conference.