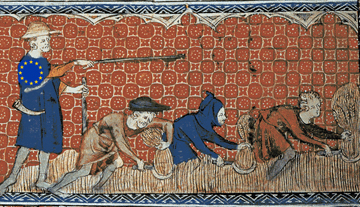 Even though with anti-EU parties having some increases in the EU elections, there is still no change to the central agenda of the centrist EU parties which will carry on moving forward with their plans for complete integration of all the peasantry.

“The EU hierarchy, who are not elected, are even more stalwart about the EU project which has to be completed soon. We will abolish nationalism, we will abolish individualism, we will eventually abolish the ownership of private property, we will abolish the family unit, we will abolish the concept of male and female, and we will abolish elections. You, as a peasant, if you survive the next twenty years, will be chipped. Yes, your behaviour will be controlled via central command within an EU hive mind processor. There will be no physical currency, only digital. Your implants will determine whether you can buy food, shop and heat the micro home in which you have been allocated. Any form of dissent by you will be punishable first by your digital money being stopped, then you will be ousted from your home. If your behaviour persists we will simply delete you from existence. You may even end up as eco food for the masses,” an unelected EU higher echelon controller revealed today after the insignificant euro poll results were announced.

Microchipping of the populations via brain implants is well on the way and will be introduced soon enough, anyone who has read a book by Google’s chief engineer would know that.

“You will most probably be given a choice, whether to be chipped or not be chipped. Naturally the elite controllers will have specialist programming far more advanced than the peasant masses. Most people are not actually conscious now without chipping, so they will not really lose anything once we control their minds completely. People will also be able to benefit from advertising beamed straight into their central cortex with visual and auditory signals. This is the Mind Net, a proposed extension of the Inter Net, which to us is a very limited medium. With central brain chipping, it would be possible for a citizen to be working in a salt mine digging like a slave, but your brain will think you are on a magnificent holiday in the Bahamas,” an EU professor of Neurology, Dr. Alfred Mengele, told Euronews.

If one adds the increased robotization of the work force and highly advanced Artificial Intelligence, there is no actual need for the Useless Eaters. Why would the elite controllers bother with all that trouble? Feeding, clothing, keeping the useless eaters entertained so they do not revolt against their masters is becoming an increasingly difficult task for the controllers of the whole show. The good thing about the governing class is they like to publish their plans well in advance, naturally many who are asleep gloss over these announcements and carry on with their unconscious lives. How it will happen, is another matter, all it will take is a crisis of some sort, as is always the case? It is quite simple really, but in the eyes of the elite controllers, highly necessary.