“Why would you want to wear such things on your head? Especially when we have the technology to put all of that and more into your head. We can hardwire technology into your brain so that you can do a google search with a single thought, recall any book in history, speak to anyone you want in the world, and record any neuromorphic memory or visual, auditory experience you want with a blink of an eye,” Hubert Ventrine, a chief scientist at MicroDent Networks situated in California, USA told New Scientist magazine.

As well as the brain chip, there are plans for mandatory RFID chip implants in humans using the ruse of medical necessity or Obamacare.

Wearing special digital internet connected glasses are of course a way to slowly get people used to being connected at all times to the digital womb blanketing the world and human population.

“You can’t go from A – Z in one go. You have to go step by step so people get used to the steps and it is not a shock to their system. When we want people to embrace new technology we have to ease them into the direction we want them to go. We can also utilise celebrities and the media to make it cool. Once the people embrace one step willingly, then we move them onto the next step. Brain Microchipping will be here soon, and it will revolutionise humanity fusing machine with man. The hive mind will be a form of human Cloud computing and it will link everyone, and will be crucial to functioning in the new society. If you do not however embrace the brain chipping, you will probably be left behind, lose your job and be ostracised by the hive mind. By completely destroying the individual, we will introduce better, more advanced control systems for the global neural human mind,” Gunther Heinz, head of communications at Net Bios, another company developing a neural brain chip for the future, told the BBC. 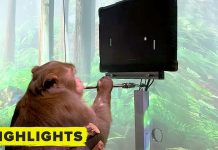