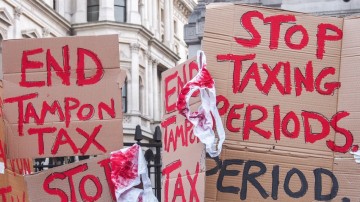 “I am appalled that the European Commission continues to treat the British people with contempt. Despite the Chancellor’s best efforts, he and the UK Government are powerless to make a minor alteration to our tax code without the EU’s permission. Now we learn that, despite a pledge to scrap the tampon tax, women will still be charged VAT on sanitary products, and any attempt by the UK Government to zero-rate them could be vetoed by any of the 27 other member states even after the referendum.

This is a minor change requested at the personal intervention of both the Chancellor and the Prime Minister and still the EU says no.  Losing control of our taxation is a failure of democracy. We need to take back control and vote to leave this failing political project.”

The Commission has announced that British women will still be paying the tampon tax after the referendum, despite Government claims to have ended the tax.

The UK will also still be obliged to increase VAT on the installation of solar panels and other energy saving products.

The Commission admits the ‘single market’ has failed businesses for decades. The EU institutions are too sclerotic to respond to the challenges of the twenty-first century.

The Commission admits that its proposals will result in an increase in red tape.

This proposal will not make it easier to lower VAT.

Vote Leave on June 23 to take back our country.