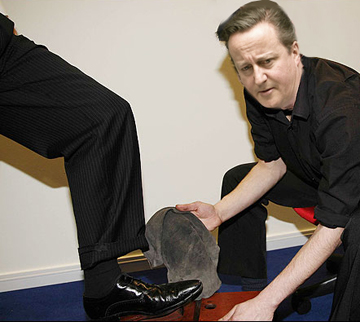 From a la carte luncheons to pow wow sessions with faceless eurocrats who run the EU behind the scenes, the British PM has been doing the rounds at the EU HQ.

Dave arrived at the offices of the European Parliament at 9am sharp and was ushered into a room for his first lesson in EU brinkmanship.

“I took the cloth the man over there threw at me. Quite violently, I might add. I asked them what they wanted me to do next. Then another man came and put his foot out. There seemed to be some dog excrement on the shoe. He said clean it off, English. I at once knew my role in the negotiations. I delicately cleaned off the excrement piece by piece, and a can of shoe polish was then received by me on my head at speed. Yes, it did hurt. The task was now clear to me. I applied the polish and buffered the shoe up until there was a spit shine quality to it. Pleased at my EU lesson, I looked up for approval. The gentleman then threw a fifty cent euro coin in the remaining excrement and told me that was mine to keep. He kicked me, then left. I was then summoned by another eurocrat to another room.”

Mr. Cameron, after being ushered from room to room all day, concluded his negotiations by being sent home to Blighty with nothing.

Another fruitful day in the EU, eh Mr. Prime Minister?