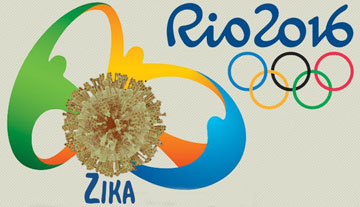 The summer Olympics in Rio de Janeiro will see millions of people converging on Brazil from all over the globe at a time when the Zika virus will be most prevalent. Authorities on the ground have been spraying certain areas to kill mosquitoes however the virus has already evolved and can now be transmitted through bodily fluids, including saliva, blood and semen.

The long term threat to the human populace is that Zika becomes irrevocably established in human DNA, ultimately creating a new type of human with severely shrunken brains over thousands of years. Where the human brain has evolved over the past 500,000/million years by increasing in size, there could now be a period of reverse-evolution with humans regressing in development.

Naturally, the poorest areas of the planet where over-population and poverty are most prevalent will be most affected in the short term. It is therefore imperative that the authorities within these regions seek to halt any breeding or sexual relations whilst the Zika virus is endemic. Unfortunately, within the third world and developing nations there is little impetus from government and the population to halt their mass breeding and the Zika virus will most certainly spread far and wide.

Once the Zika virus spreads through countries like China, India and the continents of Africa and South America, the results will soon be noticed, and air travel will ensure the virus’ spread to North America, and Europe. It does not matter if a country has cold winters, and Aedes type mosquitoes cannot survive, the virus has three or more delivery methods, therefore increasing its chances of infecting its target.

The millions of people who will attend the Brazil Olympics of 2016 will thus be conduits for the spread of Zika. When the final Olympic ceremony ends, they will all make their way to all four corners of the globe spreading the Zika virus far and wide.

The Rio Olympics will thus be an efficient method to deliver the virus globally, unchecked, undetected and to spread further than at any time before thanks to modern air travel.