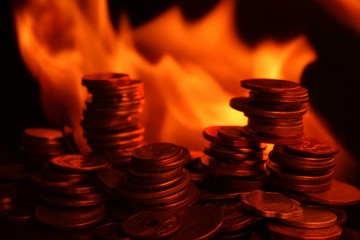 Well, in reality, it’s our reality in 2016. Google’s new artificial intelligence program is not only set to revolutionise the search engine by predicting what you’re going to look for before you do it, but open up a world of mind-reading possibilities online.

Beyond that, we already know that our Smartphones are micro computers in our pockets; however, on top of allowing you to send Snapchats, they can also track just about any bodily function you have.

Now Our Money is Virtual

Finally, when it comes to currency, things are about to get virtual. For those of you who haven’t heard about it yet, Bitcoin and other similar cryptocurrencies have been bubbling away under the surface since 2008; you can now even trade online (i.e binary options) using bitcoins. Some of these minimum deposit binary options brokers do accept bitcoin payments; however, their time in the spotlight is nigh.

Essentially an online currency that’s produced on the Internet, traded on the Internet and never leaves the Internet, Bitcoin and its peers are turning the world of banking on its head. Instead of government’s minting coins and bank notes, setting value ratings and generally having control over your cash, Bitcoin is a free entity.

The way a single Bitcoin is produced is through a complex process of dedicated computers solving complex equations. As a reward for using their processing power to solve an equation, the computer is rewarded with a Bitcoin and this action is logged by the network. As mysterious as it seems, no one actually controls Bitcoin.

Its value is determined by the number of Bitcoin in the network and people can purchase it, trade it and use it to buy goods all without seeing or touching anything. While it’s probably not time to throw away the £10 notes in your pocket just yet, many believe Bitcoin is now on the up. After hitting a peak in 2013 and then falling sharply, the value (determined by the number of users and availability of coins) is shooting up as we head through 2016.

An Industry Built on Bitcoin

Naturally, dozens of industries are clamouring to get on the Bitcoin bandwagon. From pubs to casinos, you can now eat, drink and be merry without using a single coin produced by the Royal Mint.

One of the most interesting uses of Bitcoin is the gambling industry. Commonly known as an industry where cash is king, online gambling (iGaming) is undergoing something of a revolution thanks to Bitcoin and sites such as VegasCasino.io.

Offering all the same features of any other online casino – blackjack, roulette, slots and sports betting –  Vegas Casino and its peers have made it possible for people to play and win using Bitcoin alone.

Although still something of a niche market in the iGaming arena, Bitcoin casinos are being favoured by canny gamblers for two reasons: it’s easier to deposit and withdraw (no hassle from your bank) and Bitcoin is extremely safe. In an industry where protecting your bankroll is crucial, Bitcoin ticks all the boxes.

Another unexpected use for Bitcoin is in the pub industry. Thanks to a small but growing number of pubs, you can now pay for you pint without dipping into your pocket.

One of the first pubs in the UK to start accepting Bitcoin was the Haymakers in Cambridge. Seeing the value of the currency back in 2013, the pub now allows customers to whip out their phone, scan a QR code and drink away.

Providing you’re someone that doesn’t lose their phone on a night out, this little trick is a great way to keep the drinks flowing even if your pockets are empty.

Beyond pubs and gambling, Bitcoin can now be used to purchase almost anything online. From British Airways flights to pizza, you can basically do as you wish with Bitcoin, which means it might soon be time to burn those bank notes and crossover to the virtual side.