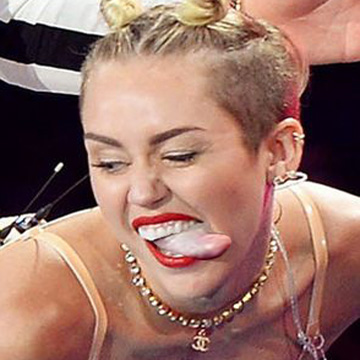 Her illness interrupted her “Bangerz” tour when she was admitted to a Kansas City hospital Tuesday.

Cyrus, 21, tweeted to fans Thursday morning that she is “over the hospital, read a page of literature the other day” along with a photo of her lying in bed. She added: “can’t quit crying i do not have one morsel of talent in me. i dont think i can ever go back on stage i am a shameful excuse for artistry and creativity … i need to get sum dignity and read a book cuz im thick as shit at the mo.”

She canceled a show in Charlotte, North Carolina, last week because of what was reported to be a severe pang of sudden consciousness of her bland banal lowest common denominator demented shallow brainwashed self. Her bout of self realisation may have made her ill say doctors, because she may have had an inkling that her crass untalented show is merely a tool for music executives to get very rich.

“Miley Cyrus was suffering from a sudden fit of consciousness during her tour in N.C. a week ago. She was prescribed a course of classic literature which she has now suffered an extreme allergic reaction to,” the statement said. “This type of extreme reaction can last from five to ten years in these types of cases of extreme lack of intelligence and stupidity.

“She will remain hospitalized and is under a doctor’s care until we see some improvement in her condition and is asking for your compassion and privacy at this time even though she keeps tweeting every five minutes. Miley is devastated about her dulled moronic existence and her lack of basic intelligence, she asks that fans delete her awful banal croakings from their hard disks and ipods and hopefully she may make a recovery from extreme stupidity in about ten years time…if ever.”