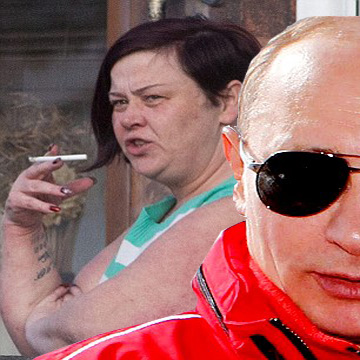 White Dee from Benefits Street has brokered a historic peace treaty between Russia and the West, achieving something which seasoned negotiators like U.S Secretary of State, John Kerry have not been able to do.

“I walked in the room. Looked Putin in the eyes, then told him about Benefits Street, how I had to call the council every day and tell ’em to keep paying up. I then took the mic, had a large swig of the vodka bottle Putin was holding then sang my latest song called ‘Crimea River’. By the end of my beautiful song Putin had a tear in his eye, a pair of ear plugs and an empty bottle.”

Vladimir Putin has vowed to visit John Turner street in Birmingham next time he invades Britain.

As for White Dee, she’s now up for the Nobel Peace prize, and a lucrative career as a peace broker for the British government, her next stop being Palestine.

‘Crimea River’ will be available in all good Job centres and Benefits offices across the country from tomorrow.