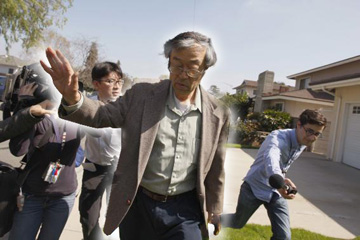 Satoshi Nakamoto, a name known to legions of Bitcoin users around the world, appeared to lose his anonymity on Thursday after Newsweek published a story that said he lived in a town, just east of Los Angeles.

Legions of reporters besieged the Bitcoin founder’s home on Thursday, but were bitterly disappointed when he walked out of the house he was living in.

“He walked out of the house in broad daylight. I went up to him to shake his hand but my hand just went through. There was nothing there. He’s a hologram. A very elaborate hologram with some amazing technology behind him. He then said he was not the inventor of Bitcoin, he made a static kind of sound before he shape shifted into a white speckled bunny rabbit then hopped off into a bush,” Miles Kendrick, a reporter for ABC news revealed.

According to tech experts, Nakamoto, is a high matrix hologram, probably a sentient program who is highly encrypted and cannot be hacked. There is speculation that Satoshi Nakamoto was created in a lab somewhere in Area 51, Nellis Air Force Base or could even be a reverse engineered entity from higher intelligence.

“I called Ray Kurzweil on the phone. He was amazed that this kind of tech has been discovered, as it should be top secret,” Joel Silverstein, tech writer for Wired magazine wrote in his column.

Bitcoin rose 23% in the financial markets after the amazing discovery.