“She was walking up the runway when I heard a loud snap sound, you know like a twig breaking. Then I saw her, she made a mess on my new collection. I can’t believe she did this,” Arturro Avantee, designer of the 2013 collection revealed to Fashionista magazine.

Ambulances were called but it was too late for the model, whose name was withheld for privacy reasons.

There are calls for fashion models to have metal splints put on their legs and spines to stop them snapping in the future.

“We gotta check the models to see if they are ‘snappers’. I gave one a piece of lettuce before the show and she ate the edge of it. If we feed them more then this would not happen again, Slav Labor, a fashion assistant at the show told CNN. 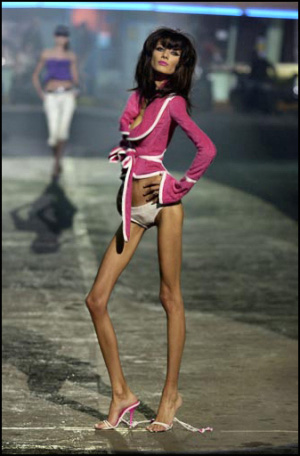 One witness was still in shock: “She was just trudging by me when she literally snapped in half. I mean her top half was suddenly by her feet. Someone came over with a little trolley, scooped her up, then the Fashion Week show carried on as normal. No one else even batted an eyelid.”