The music biz in the UK is in such a terrible state that the charts are now solely filled by banal caterwauling speeded up yelping female vocal samples, Antares RNB template songs, and low IQ rappers who can barely string a sentence together let alone a coherent thought.

This is why new leftist darling, Spitzy is storming up the charts.

Spitzy, is from South London, and has an IQ so low doctors have even declared it lower than one American rapping phenomenon.

Coming in at number 6 this week in the charts from a previous high of 18, Spitzy is now the darling of the leftist communist mob, and fully supported by the Corbyn Momentum group to his chart success.

When asked if he knew what communism, or collectivism were, the rapper in December’s issue of Melody Maker replied: “Is it summink to do wif da rozzers innit? Dey comin into mandem and collectin us to put us inda communisms innit?”

Spitzy, during the election fully supported Jeremy Corbyn, despite not knowing one single thing about communism or any other political ideology, and how Corbyn would have effectively ruined Britain forever.

“Red is my fave colour innit so dats why I voted for him, plus all da trendies did too so I followed dem because dey told me to do it, mandem bruv innit!”

Because of his celebrated low IQ, doctors at University College Grimsby studied Spitzy’s brain in October to see how he was still functioning despite having a lower IQ than a Paucituberculata.

“Spitzy’s brain is actually the size of a marsupial’s, yet he can still function in daily life. This for us is an incredible find,”  Professor Rheinholdt Valkyrie, wrote in Lancet. 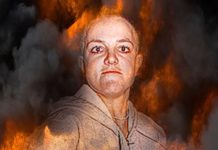