When it comes to the #metoo new puritanism that is sweeping the politically correct sovietized West, there is no place sacrosanct.

Now that the art world and museums are being targeted worldwide by the cultureless puritans and their ISIS-like penchant for erasing history with destruction, new levels of censorship and banning are being reached daily.

“I saw a Roman statue of a female nymph. The statue objectifies the female form and accentuates her breasts and privates. This is disgusting. We should ban everything Roman,” one social justice warrior yelled at the British museum’s Roman section.

The woman was then pointed towards the Greek section of the museum where she went even more hysterical after spying a sculpture of a Greek Goddess fellating a male lion according to some myth or something.

Of course the sculpture of a nude woman objectifies the female form, that is what art is meant to do, it is meant to present this piece of stone, then transform it into this wonderful curvaceous objectification of the beautiful female form. It is in essence a celebration of the female. What the fuck is wrong with that? Sculptures and painters have been doing it for thousands of years.

The vagina and vulva have been depicted in art from prehistory to the contemporary art era of the 21st century. Visual art forms representing the female genitals encompass two-dimensional (e.g. paintings) and three-dimensional (e.g. statuettes). As long ago as 35,000 years ago, people sculpted Venus figurines that exaggerated the abdomen, hips, breasts, thighs, or vulva.

Feminist activist Gina Warte, has applauded an obscure Manchester art gallery — which will either hopefully be burned to the ground or attendance dropped to zero — that recently threw out a Waterhouse painting depicting some salacious nymphs coaxing a man into a pond. This pre-Raphaelite masterpiece has now been consigned to the bin thanks to the feminazi puritans. 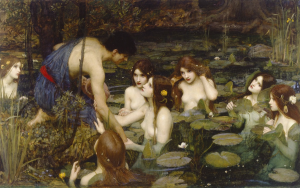 “This Waterhouse painting showed a vile depiction of young women as objects in a pond asking a man to join them. In 2018 wimmin hate men and we would never ask a man to join us in the water only if we could drown the bastard. I myself have never slept with a man or had relations with a man because I have big arms, a hairy chest and my vulva looks like a pair of testicles dangling between my legs. I am therefore angry at men for rejecting me.”

All galleries worldwide were warned in a global poster campaign funded by shady socialist groups that they have until next week to remove all depictions of women from all galleries, especially if nude.

John D. Salinger, a gallery owner from New York was not amused by the anti-art, anti-female form puritanical activism that has been going around.

“Puritans have a choice. They can stay away from the art gallery, they can switch off, they can hide in their room, but for fuck’s sake, let us other people enjoy what we’ve been enjoying for thousands of years, i.e. the female nude body. Just go and shoot yourself in your brainwashed nazi brain.”