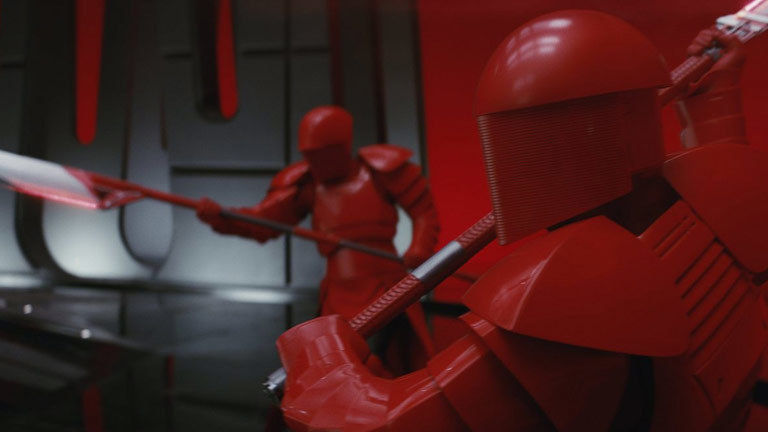 Oh yeah, there is a new Star Wars film doing the rounds, but it is so crap and unmemorable that we actually forgot to write up a review of it.

The film is a mismatch of different scenes plonked onto one stale piece of moribund shit, that is frankly a disservice to any Star Wars fan, or anyone who watches any type of film for that matter. The funny thing is it’s not a film because it does not really have a storyline or plot but sort of meanders along with little battle scenes plonked in every few minutes.

Snoke, a deadly Sith lord, who is supposed to be very powerful, is chopped in half by a wayward lightsaber accident within the first few minutes of encountering him. Such a terrible waste, not only of Siths but of action scenes. Obviously the film-makers were way too lazy to bother having a full-on fight with a Sith lord, instead he gets chopped in half like some pathetic piece of mutton in a Halal butcher’s shop down in Leytonstone on a Saturday afternoon.

The rest of the film is too stupid and boring to even mention. Luke Skywalker is a miserable old fart who is found on a Scottish island milking odd prosthetic plastic creatures’ fleshy teats and fishing with a long pole. Finn is the token black bloke in space who always looks surprised  and sweaty in a space suit. Princess Leia, in reality was so coked up on drugs she did not know where the fuck she was, and this showed in the film as she stumbles from one scene to another looking like a Hollywood botox casualty on multiple lines snorted from the star ship’s dashboard. The female heroine of the film, has her hair pulled so far back on her head that she resembles a Croydon chavette in space. The only thing missing is a pair of hoop earrings, a crying baby and a fucking tracksuit.

Kylo Ren, or whatever his name is as well as his sidekick are spoiled little brats having tantrums in space. It’s one tantrum after another, as they fling pieces of lego around the set.

The finale, with a teleported astral vision of Luke doing a walkabout is the only bit worthy of the whole film. That is it. The rest of it is absolute bollocks. Oh, one last mention, the crimson red background and Elite Praetorian Samurai-esque guards for Snoke were pretty cool..that’s it though..

Star Wars used to be something special. Those days are all gone. Now it is something resembling Harry Potter or some other cutesy Hollywood crud that is simply a vehicle for some new director to establish himself in the biz. The formulaic nature of the new Star Wars films skimps on introducing new characters, new innovations and new story lines instead delving into a tired old soap opera consisting of just a few mediocre characters following each other around in space in an endless circle.

It is probably too late but if you are going to see this film, do not pay for it, because this would encourage more of its ilk to be made. Simply go onto the many streaming services on the net and watch it for free in full HD.