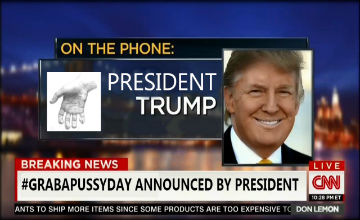 Speaking in New Jersey where president Trump was visiting a woman’s lingerie manufacturing company, he said:

“I just grabbed the lady CEO’s pussy. I’m meeting the British PM, Theresa May in London, England next week and I’m gonna grab her by the pussy too. I might need both hands for Angela Merkel who I’m meeting after. You know I like to do that.

“Grabbing women by the pussy is every man’s God given right, and listen to me, I’m making it official, as president I want a day dedicated to this act.”

Orders have been put through that July 27 should be ‘Grab a Woman by the Pussy day ‘.

This presidential decree means it will be sanctioned by the White House to grab any woman by the pussy on July 27.