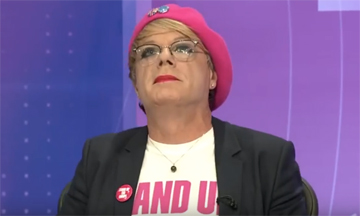 Amongst the disinformation and fearful headlines spouted from the morose Britain Stronger in Europe campaign we also have Eddie Izzard, a dilettante luvvie political dabberer, and confirmed champagne socialist media whore only concerned for shallow trivial EU arguments.

What is Izzard doing here, apart from confusing the issue of EU referendum?

Izzie, is an ignorant fool, he is uninformed and doesn’t even know he is surreptitiously working for Goldman Sachs and JP Morgan, his naive inconsequential smatterings are bereft of fact only fuelled by flappy worthless emotion.

To stamp on Izzard with a shod foot would be a nicety he would probably enjoy it such are the pithy orchestrations displayed by this flapping freakshow auntie and his moribund pinko commie message.