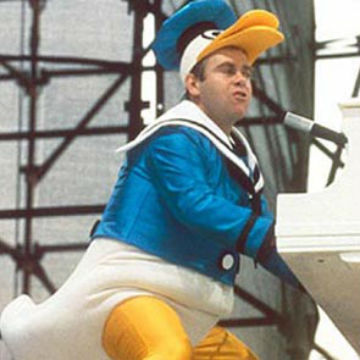 “I can’t leak the full album details but Elton pushed it to the max with this album, and it even has a cameo from his husband playing the piccolo whilst rolling around his Italian marble floor. The first track is the real kicker, we get the sound of a stool being pushed in kinda screechy sounding, then a splat as loads of blokes bundle in with their instruments. Some nice arpeggiation although the bridge is a bit floppy, but we just added more compression to the mix for a nice brown sound,” producer Vance Stubber, told Melody Maker magazine.

Where the album lapses in melodic function it prolapses in sheer volume of hits crammed into such a loose record.

“At one junction, we thought he lost it, Elton had a tantrum, because of something or rather,but after he stopped throwing things around we were back in junction and moving along fine.”

The homosexual couple hope to adopt more children from some Eastern European shit hole into their friendly family in the future, maybe they can all make albums together.