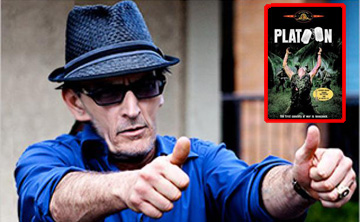 “I’m into self destruction myself, so I jumped at the role when I read the script. The director himself has full blown AIDS, and he knows what it’s like to carry around two hundred pills everywhere. I’m on the edge myself, never used a condom and been with anything that moves. The lead role takes point, then goes into a hooch and falls in love with a Vietcong lady, the fact that she got every disease under the sun doesn’t cross the character’s mind, and he has to do the rest of his tour whilst suffering from gonorrhoea and herpes. In those days they didn’t have HIV thank god, but I got it now in real life. I’m still winning though, winning the fight against full blown AIDS.”

The party-hard star is a real fighter and HIV is totally manageable these days as long as the sufferer takes a cocktail of drugs every day to stay alive.

“It’s about mixing, a lil coke here, an anti-viral there, maybe some amphetamines, some crack and a toot of pcp, that usually gets me outta bed in the afternoon. By midnight I’m partying, maybe doing ten chicks a night, some she-males, whatever. Might get a call from the producer or script coordinator, then I’m back filming the next day if they can get me outta bed. This is the life I wanted and I’m lovin’ it. When you have tiger blood, HIV ain’t nothing.”

Charlie Sheen, has even named his human immunodeficiency virus, which the star is now playfully calling ‘Tinder’.