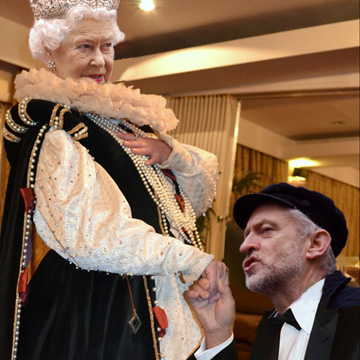 As leader of the opposition, Jeremy Corbyn has a childish proclivity for protest, and his initial refusals to bow and kiss the hand of Her Majesty are testament to his staunch Republican ideals, but, the Queen was in for quite a surprise on Wednesday night.

You do swear by Almighty God to be a true and faithful Servant unto the Queen’s Majesty, as one of Her Majesty’s Privy Council. You will not know or understand of any manner of thing to be attempted, done, or spoken against Her Majesty’s Person, Honour, Crown, or Dignity Royal, but you will lett and withstand the same to the uttermost of your Power, and either cause it to be revealed to Her Majesty Herself, or to such of Her Privy Council as shall advertise Her Majesty of the same.

To the surprise of Her Majesty and the others gathered at the Privy Council’s ceremony, Jeremy Corbyn did kiss the Queen’s hand and bow, albeit under one condition, he kept his little commie cap on.

“There were two burly gentlemen flanking Mr. Corbyn, who were preparing themselves to forcibly make the leader of the opposition bow, when Corbyn out flanked them and proceeded towards the Queen. He licked his lips and got down on one knee languishing on her extended hand an almighty licking as if it were a fruity popsicle. The Queen, who at first was enamoured by the gesture, tried to take her hand away as the fawning Corbyn really got to work; concentrating on each finger and knuckle at one point burping with appreciation and slobbering drool over the red carpet. After a few moments, there was quiet in the chamber as Corbyn rose, still holding the Queen’s hand ransom, he gave her a last lick and a wink. By this time, the two burly gentlemen had reappeared to drag the fellow away before he managed to do any more damage to the ceremony,” an eyewitness at the event retold.