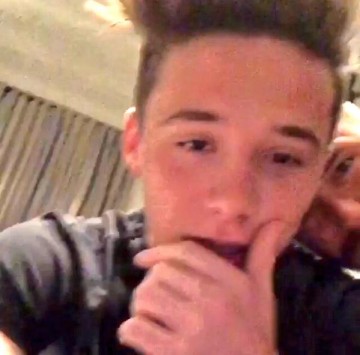 As if it weren’t bad enough seeing the high-pitched voiced gimp, David Beckham moping around LA with the derogatory celebrity Scumbucks to-go cup and his mutilated arms dragging along the pavement, we also have to endure the parading missus and her permanently constipated scowl trying to make herself relevant by doing ‘fashion’.

To add insult to injury, we additionally have to put up with their vulgar low-bred chav progeny being spammed into every media orifice.

With a name like ‘Brooklyn’ and part of the crude Beckhams, he was guaranteed to be a smirking inane entitled shister of the highest order, a turd gently ambling down the side of a bowl in some Chingford betting shop toilet.

Sporting the same haircut as his dad, pig-eyed Brooklyn is a mediocre looking teenager of low breeding with no distinguishing qualities apart from possessing a lower IQ than his ex-footballer father, a prime example of nepotism gone wrong.

“These shit celebrity offspring are tolerated because we are paid to tolerate them,” an LA model agent revealed on condition of anonymity.