Jackson who is also being pursued by approximately 245 debt collectors all wanting large sums of money from him, is so desperate for cash that he turned up on set unannounced pleading for clemency.

Lucas who is not afraid of seeing wild looking alien creations was taken aback by Jackson and screamed out in surprise when the former King of Pop appeared out of a shadow.

“George screamed like a little girl when he saw Jackson come out of a shadow at him. I never seen George fazed like that. This is the same guy who has created some of the most fearsome creatures in celluloid history,” a production assistant working on the film told the Daily Squib.

Jackson may still get the part because of his scare factor however there are liabilities to his employ: his weak facial structure which is not possible to insure, the hundreds of people trying to recover debts from him all the time and there will be children on set. 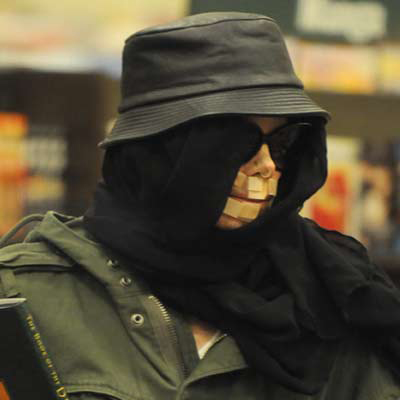 The Daily Squib feels that Michael Jackson is more suited for Clive Barker movies and as a favour to the ailing star have forwarded a recommendation to Mr Barker’s production company. Don’t worry Michael we’re all looking out for you.

You Must be Happy in the Happy Happy World of Meghan...