Pete Doherty was honoured at Buckingham Palace for his services to British ‘drug-taking’ and ‘prison-dodging’ today.

He is now a proud Member of the Order of the British Empire.

Kneeling before the Queen, he picked up a syringe which had fallen out of his jacket and shrugged his shoulders whilst smiling like a Cheshire cat.

The Queen has been very impressed by Pete’s prison dodging antics and calls him affectionately ‘the artful dodger’.

To date, Doherty has been caught over 29 times and only briefly arrested once for carrying large quantities of class A drugs like heroin, ketamine, cocaine, crack and meth amphetamine.

He has been immune to prosecution nearly every time and walked free out of all court sessions intended to jail him for longer periods.

Awarded for achievement or service in and to the community that is outstanding in its field; or very local ‘hands-on’ service which stands out as an example to others.

Doherty has shown to have outclassed and outrun the useless prosecution services each and every time and made them into a laughing stock only fit for ridicule.

To celebrate his new found status Doherty took out a large grotty HIV infected syringe in front of the Queen, smiled at her as he rubber banded his arm and dug the needle deep into one of his only working veins.

It was at this moment a little squirt of blood gently spilled onto the Queen’s shoes. 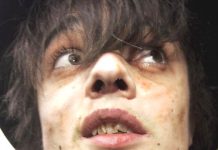 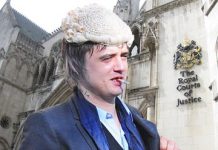