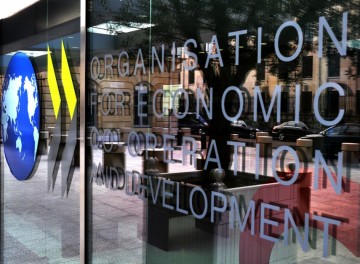 ‘The most important finding in today’s report is the acknowledgement that the UK economy will continue to grow after we vote to leave the EU.

‘But this is a flawed report, that makes assumptions which have been roundly dismissed by senior economists.

‘Instead of listening to partisan advisory bodies, let’s look at what businesses are actually telling us: that the costly red tape and regulations emanating from Brussels are constraining their ability to innovate and create jobs.  If we Vote Leave on 23 June, we can change that.’

The OECD report wrongly assumes that trade will suffer in the event of a vote to leave. This assumption has been slammed by a former senior International Monetary Fund economist today.

The report claims ‘there likely would be a marked change in the UK trade regime, raising barriers to market access for many exporters especially in the European Economic Area and in the 53 countries with which the European Union has trade agreements.’

This has been contradicted by Ashoka Mody, a former senior International Monetary Fund economist: ‘All productive trading relationships will remain intact. For this reason too, German Finance Minister Wolfgang Schaeuble’s threat that renegotiation of Britain’s trade arrangements with the EU would be “most difficult” and “poisonous” is bluster. Germans run a trade surplus with Britain. Mr Schaeuble can humiliate the IMF, but he dare not hurt the interests of his exporters (or his importers). And even if British trade with the EU falls, trade with other regions will undoubtedly increase‘.

The UK’s former Ambassador to the EU and leading supporter of BSE (Britain Stronger in Europe), Lord Kerr of Kinlochard, has admitted ‘there is no doubt that the UK could secure a free trade agreement with the EU. That is not an issue’. The pro-EU CBI has said ‘the UK is highly likely to secure a Free Trade Agreement with the EU, and such an agreement would be likely to be negotiated at an extremely high level of ambition relative to other FTAs‘. The pro-EU Centre for European Reform has accepted that ‘given the importance of the UK market to the eurozone, the UK would probably have little difficulty in negotiating an FTA‘.

The OECD report out today acknowledges that the UK economy will continue to grow after we Vote Leave.

The OECD report states that the UK will grow by 1.6% in 2016 and 1.9% in 2017. This is higher than many other EU countries, including France, Belgium, Finland, Italy, and Portugal.

The report also states that ‘By 2030, UK GDP could be over 5% lower than otherwise if exit had not occurred‘.

In a report released last month, the OECD stated that its central forecast is ‘an annual reduction in UK GDP growth of 0.3 percentage points per annum over 2016 to 2030’ (This amounts to 4.5% over the total period).

Since trend growth in the period 1980 to 2014 averaged 2.2% per annum, the OECD forecast that the UK economy would continue to grow on average by at least 1.9% per year until 2030 if we Vote Leave.

The OECD has previously admitted that the only way that the Prime Minister’s promise to cut migration to the tens of thousands is if we Vote Leave.

The OECD has previously stated: ‘Withdrawal from the EU could also provide scope for the imposition of tighter controls on inward migration. This would reinforce the endogenous effects on economic migration coming from a weaker UK economy and labour market. Net inward migration is assumed to decline by 84 000 per year over 2019-2023′ (OECD, April 2016, link).

The OECD previously stated that: ‘After Brexit, immigration is likely to be restricted more significantly‘.  It further acknowledged that, if we Vote Leave, we can control the quality of people coming to the UK: ‘Measures to control immigration, based on the introduction of points systems as in Australia and Canada, help to increase skill levels of new immigrants‘.

The OECD has also previously said that the only way to get immigration down to the tens of thousands is to leave the EU: ‘following Brexit, tighter controls in the UK could lead to a reduction of net migration from EU and non-EU countries to below this level‘.

The Prime Minister previously promised to reduce migration from the hundreds of thousands to the tens of thousands. His Director of Strategy at the Britain Stronger in Europe (BSE) campaign said: ‘No policy on immigration is the right policy‘.

The OECD is wrong to claim that the referendum has led to uncertainty.

The report claims that the referendum has led to an ‘increase in risk’, but this assertion is not backed up by the evidence. The OBR has stated that ‘there were only tentative signs of uncertainty regarding the EU referendum result affecting investment intentions by the time we closed this forecast and we have made no adjustment to reflect a change in behaviour’.

The OECD also claims that leaving the EU would have an impact on asset prices, but the Bank of England has had to admit that ‘the evidence on whether other asset prices, including market interest rates and equities, have been affected by the referendum is less clear‘.

The OECD report also states that leaving could raise inflation – but in February 2016, the Bank of England’s inflation report did not see the EU referendum as a major issue in determining inflation, stating: ‘Global growth has fallen back further over the past three months, as emerging economies have generally continued to slow and as the US economy has grown by less than expected. There have also been considerable falls in the prices of risky assets and another significant fall in oil prices’.

The OECD recommended British entry into the euro. This would have been a disaster for the economy and for jobs.

In 1999, the OECD stated: ‘The introduction of the euro delivers a number of benefits. These include reduced transaction costs associated with trade and financial interactions with other euro area countries, no intra euro area exchange rate risk, greater overall price stability and sharpened price transparency. Lower exchange rate risk also implies that interest rate risk premia should be small, and therefore lower borrowing costs in many countries. These benefits will complement the single market in goods and services and are likely to reinforce the long-run efficiencies associated with the single market. The European Commission estimated nine years ago that the direct static benefits of monetary union linked to lower transaction costs could be around 1/2 a per cent of EU GDP, equivalent to around $40 billion a year. Recent studies have estimated larger gains (up to 1 per cent of GDP). EMU is also likely to generate endogenous consequences such as more transparent prices unleashing stronger competitive forces, possibly fewer policy induced shocks compared with the past as a result of the stability-oriented macroeconomic policy framework and it may serve as a catalyst to speed-up structural changes’.

In 2000 it was reported that the OECD wanted the UK to join the euro: ‘Britain told: economy is ripe for euro… The government’s attempt to keep the lid on the debate over joining the euro until after the election was undermined by an independent report from the world’s top economic thinktank which said the British and core European economies were close to converging. In spite of strenuous efforts by the Treasury to delete mention of anything remotely contentious, the Organisation for Economic Cooperation and Development’s regular healthcheck on the UK economy said that in some respects the UK would soon be more like Euroland than some of the new currency zone’s existing members’.

It was also reported that: ‘Britain is more suitable to join the euro single currency than many of its existing members as the difference in output and GDP growth rates are continually narrowing, the Organisation for Economic Cooperation & Development said today’.

The author of the study, Vincent Koen, said: ‘If Greece is deemed fit to join, it would be strange if the UK wasn’t‘.

The OECD said the Exchange Rate Mechanism would benefit Britain. It was a disaster.

In December 1990, the OECD said: ‘while the benefits are potentially great, ERM participation constitutes an ambitious strategy for the United Kingdom’ (Xinhua General News Service, 20 December 1990).

‘Pointing out the full members of the European Monetary System have an average inflation rate of slightly more than 4%, compared to 8.3% in Britain, OECD economists make clear their support for a quick decision by the British government on joining the exchange-rate mechanism of the system’ (The Financial Post, 30 June 1989, p. 7).

In October 1990, the UK joined the ERM. The ERM caused interest rates to rise to 15%, led to millions of households going into negative equity and unemployment reaching 2.9 million in 1993. The resulting ‘Black Wednesday’ debacle that resulted from Britain’s membership of the ERM cost the UK economy £3.3bn, according to HM Treasury analysis. The UK economy recovered rapidly after leaving the ERM.

The OECD is not an impartial organisation, having received €30.5 million from the EU between 2007 and 2014.