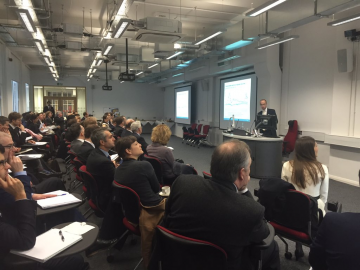 Yet Another Ludicrous Threat From the BSE Campaign Debunked

Commenting on the Britain Stronger in Europe campaign’s claim that 100,000 manufacturing jobs would be lost if we took back control, John Longworth, Chair of the Vote Leave Business Council, said:

‘These daily threats are becoming absurd. The jobs they refer to don’t even exist – so how can they be at risk?

‘Instead of listening to speculation from advisory groups, let’s look at what the job creators are actually telling us.

‘Businesses up and down the country say that the costly red tape and regulations emanating from Brussels are constraining their ability to innovate and create jobs.  If we Vote Leave on 23 June, we can change that – and look forward to a more prosperous country and a faster growing economy‘

BSE (Britain Stronger in Europe) claim that 100,000 manufacturing jobs are ‘at risk’ if we take back control and revive the claim that 3 million jobs are linked to the UK’s membership of the EU.

The 100,000 manufacturing jobs do not currently exist, so cannot be ‘at risk’. The CEBR is merely claiming they might be created in the future if we stay in the EU.

The CEBR research concludes that 107,390 manufacturing jobs might be created in the event of a vote to remain in the EU. It uses reports prepared on behalf of European Union institutions to quantify the future benefits of the so-called ‘single market’.

The CEBR uses EU-commissioned estimates of future jobs to be created by the ‘single market’, which have been overly optimistic in the past.

Estimates by the EU about the benefits of the ‘single market’ have been overly optimistic in the past.

In April 1988, the Commission published a forecast claiming the ‘single market’ would yield ‘total economic gains of the order of 4¼% to 6½% of GDP for the Community as a whole’. This implied a middle forecast of gains of 5.4% of GDP.

This forecast was out by a factor of two. In 2012, the Commission claimed that the ‘single market’ had raised EU GDP by 2.13%, less than half what had been forecast in 1988. This itself seems an excessively optimistic claim in light of the same document’s (wholly implausible) assertion that the introduction of the single currency had boosted Eurozone GDP by 3.6%.

The CEBR has previously admitted that their figures for the number of jobs linked to trade should not be seen as job losses if we Vote Leave.

The CEBR report makes clear that its research is based on ‘Jobs linked to UK exports to EU countries’. This cannot be used a proxy for job loses if we leave the EU – as the CEBR itself has previously admitted.

In a similar piece of research for the pro-EU group British Influence, the CEBR said: ‘This piece of research does not imply that the estimated jobs would be lost if the UK were to leave the EU; it is an analysis of demand arising from UK exports to the EU’.

The CEBR has previously admitted in a report for BSE that ‘it is, obviously, impossible to calculate the impact of being in the EU’ and that ‘in truth, what life would be like outside the EU is impossible to predict with any degree of certainty’.

The CEBR has also previously admitted that ‘it would be wrong to say that all the benefits of the Single Market would automatically be lost if the UK were to leave the EU‘.

The claim that 3 million jobs might be lost if we left the EU has been disowned by the IN campaign itself.

The Executive Director of the IN Campaign, Will Straw, has admitted: ‘We have not and have never claimed that 3 million jobs would be lost if we left the EU‘.

The ‘3 million jobs’ figure was invented by the pro-euro campaign group, Britain in Europe, in 2000, as part of their attempts to scrap the pound.

The economist whose work they traduced, Dr Martin Weale, dismissed the figure as ‘pure Goebbels‘, stating that ‘in many years of academic research, I cannot recall such a wilful distortion of the facts’.

The figures published today are almost identical to research published by the pro-euro campaign fifteen years’ ago, although the number of jobs ‘at risk’ has fallen by 200,000.

The table below shows how many jobs the pro-euro campaign, Britain in Europe, claimed in 2000 were ‘at risk’ in each region if the UK left the EU, compared to the number of jobs its successor, the BSE campaign, now claims are linked to trade with the EU.

Leading campaigners in BSE were previously active in Britain in Europe, like Roland Rudd. They were wrong about the euro and they are wrong now.

Sir Vince Cable made the same warnings he will make today about the effect on manufacturing if we didn’t join the euro, as did the EEF, Airbus and Siemens.

Sir Vince Cable claimed manufacturing jobs were at risk if we didn’t scrap the pound, stating: ‘It is now becoming abundantly clear that British exclusion from the euro project is putting at risk thousands of jobs in areas of relatively high unemployment, like Wales and North East England. The Government has dithered long enough’ (Daily Mail, 5 July 2000, p. 45). In 2002, he said: ‘It is about time the secretary of state came out and made the case for the single currency so strongly’.

The EEF (The Manufacturers’ Organisation) also called for the pound to be scrapped: ‘The Engineering Employers’ Federation is backing the CBI’s call for the government to make a stronger case for the euro. “The government isn’t leading the debate,” said Martin Temple, EEF director-general’ (Sunday Business, 6 February 2000). It stated that: ‘The longer it goes on, the Government will just be playing Russian roulette with manufacturing jobs’ (The Sentinel, 3 July 2000, p. 4).

Siemens also claimed jobs and investment would be put at risk if we didn’t join the euro. In 1997, Jurgen Gehrels, Chief Executive of Siemens UK, said: ‘If Britain decides not to join the single currency it will definitely affect our investment decisions in the future. I am quite sure the same applies to others especially companies that serve not just the UK market but world markets’.

Noel Forgeard, Chief executive of Airbus, claimed it would be a ‘risk’ for the UK to stay out of the euro.

If we Vote Leave, we will take back the power to make our own trade agreements. This could create 300,000 jobs.

Control over trade policy could create 300,000 jobs. The EU’s failure to conclude just five trade agreements, with the United States, Japan, ASEAN, India and Mercosur has, according to the European Commission’s own figures, cost the UK 284,341 jobs. A clear majority of British businesses want the UK Government, not the European Commission, in control of trade policy and have done so for over a decade. This would boost jobs, growth and investment.