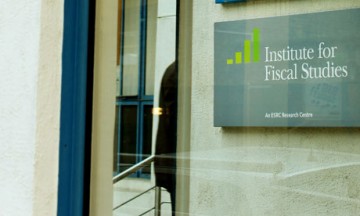 ‘It’s no wonder people are being turned off this debate given the continuous campaign to do down the British economy from EU-funded organisations. So many of these studies are based on entirely negative assumptions about our economy and the future decisions a UK Government outside the EU would make, but ignore the pressing need of EU countries to continue trading with the UK. They also ignore the very real risk of what will happen if we vote ‘In’; more money and power to a Brussels interested only in propping up an ailing eurozone.

‘If we Vote Leave we can secure our economic security for future generations based on expanding our trade across the globe, turbocharging our economy and taking control of our borders. On 23 June the safer option is to Vote Leave.’

The IFS is wrong about the level of the UK’s contributions to the EU budget.

Contrary to the IFS’s claim, the UK does pay £350 million per week to the EU. In 2014, the UK’s gross contributions to the EU budget were £19,107 million, or £367 million per week. The Head of the UK Statistics Authority, Sir Andrew Dilnot, has said ‘Yes, the £19.1 billion figure is a legitimate figure for gross contributions… the official statistics are the £19.1 billion’.

The IFS wrongly deducts the rebate from the gross figure. The rebate is a discretionary grant which the European Commission can pay to the UK if it so chooses. There is no obligation on the Commission to pay it. As the Chancellor of the Exchequer, George Osborne, has said: ‘It is not a unilateral decision of the British Treasury or the British Government to just say, “This is our rebate. We are entitled to it. Pay up”. The way this works and has always worked is there is a negotiation with the European Commission’.

The IFS underestimates the net contribution. In 2014, the UK’s net contribution was £9.872 billion. This rose to £10.649 billion in 2015. This is much higher than the £8 billion suggested by the IFS, which takes into account payments to the private sector to the UK without taking into account money paid by British companies to the EU. The overall balance between the UK and the EU institutions (the current account deficit added to the capital account surplus) was £10.9 billion in 2014.

The IFS uses the National Institute of Economic and Social Research (NIESR)’s study as the basis for its forecasts. The NIESR has been wrong time and time again on the EU.

The NIESR backed scrapping the pound, which would have been a disaster. ‘The heavyweight and independent National Institute of Economic and Social Research agreed, saying joining Europe’s single currency would benefit Britain and that there was evidence of economic convergence with the European Union’ . The NIESR said: ‘Part of the foreign investment in Britain appears to take place because Britain offers a gateway to the European Union. If the United Kingdom remains outside the monetary union, then other countries are likely to offer a more attractive gateway’ (Birmingham Post, 29 July 2000, p. 19). A report by the NIESR in 2002 stated that: ‘We would argue the Chancellor’s five tests can be seen to be answered in the affirmative, and that the case for joining is clear’. In April 2003, the NIESR concluded that: ‘There is no longer a case for waiting’.

The NIESR recommended rejoining the ERM after Black Wednesday, which would have been a disaster. ‘Among the most optimistic is Andrew Britton of the National Institute of Economic and Social Research who believes that Britain will have to return to the ERM, though not for another six months at least’ (Evening Standard, 30 September 1992, p. 29).

Even the IFS has to admit that any hypothetical ‘hit’ will be small and less than the OBR’s past errors in forecasting.

The report states that the effects of leaving the EU ‘would certainly be much smaller than the effect of the 2008 recession, which hit the public finances to the tune of around £175 billion. Indeed, it would be below the downgrades to the forecasts made by the OBR between the Budgets of March 2011 and March 2013 (estimated at £43 billion). We have coped with those.’

The IFS is wrong to claim trade will not become more expensive in the long-term.

It is in other EU countries interests to strike a free trade agreement. The EU sells the UK far more than the UK sells the EU. In 2015, the UK bought £67.8 billion more in goods and services than the UK sold to the EU. In 2014, 20 EU member states sold the UK more than the UK bought from them in 2014. The UK is the EU’s largest single export market for goods, larger even than the United States, with whom the EU is presently trying to negotiate a free trade agreement.

Even pro-EU campaigners have conceded the UK will strike a free trade agreement. The Prime Minister, David Cameron, has admitted: ‘If we were outside the EU altogether, we’d still be trading with all these European countries, of course we would … Of course the trading would go on … There’s a lot of scaremongering on all sides of this debate. Of course the trading would go on’. The CBI, The UK’s former Ambassador to the EU and leading supporter of the BSE campaign, Lord Kerr of Kinlochard, the pro-EU Centre for European Reform all agree with him.

The UK will not become a less attractive destination for foreign direct investment (FDI).

There is very little evidence that being in the EU has had much of an impact on investment flows into the UK. Historically EU countries have not been major investors. Official figures show that the total net foreign direct investment (FDI) into the UK from the EU has been in decline over the last ten years, with the EU actually disinvesting in the UK in 2010 and 2013.

Despite the referendum and the prospect of a British exit from the EU, the Chinese investment group SinoFortone announced £5.2 billion of investment into the UK in October 2015. In November 2015, the UK and India struck £9 billion worth of commercial deals, with the Government noting that: ‘India invests more in the UK than the rest of the European Union combined’.

Major international investors have made clear that they will continue to invest in the UK regardless of the result of the referendum:

Toyota has been clear that it has located in the UK because of the tradition of UK vehicle manufacturing and the large domestic market, as well as good transport, workforce, working practices, the English language and a supportive government. The EU is not even mentioned on its list of factors. Its chief executive, Akio Toyoda, has pledged to keep building cars in the UK in the event of a Leave vote.

Nissan announced a £100m investment programme in their Sunderland plant last September, after it became certain that an EU referendum would take place. Its Chief Performance Office, Trevor Mann, has said that, with a future UK-EU trade agreement, ‘[Brexit] wouldn’t make a lot of difference’. Carlos Ghosn, Chief Executive of Renault-Nissan, has similarly commented that ‘I don’t think there’s a reason to worry’.

Hitachi’s Chief Executive, Takahiro Hachigo, has also confirmed that the company will continue to do business here after a British exit from the EU. In March last year, Honda also announced a £200m investment programme in the UK car industry.

Major international investors have made clear that they want the UK to have a looser relationship with the European Union. In an EY survey it was found that 72% of US investors and 66% of Asian investors wanted the UK to reduce its links to the EU.

The IFS is not a neutral organisation. It would face an £800,000 deficit if we Vote Leave.

The Institute for Fiscal Studies (IFS) has received €7.4m from the EU since 2007. It is not an independent organisation, but a paid-up propaganda arm of the European Commission, as the table below shows.

This means that if we Vote Leave, the IFS will face a financial deficit of £792,931, or 11% of its income. It is therefore in the IFS’s interests to adjust its skewed biased report figures to favour membership of the EU.