Responding to David Cameron unveiling a new Britain Stronger in Europe (BSE) campaign poster, Vote Leave is today publishing a series of graphics that highlight the costs of voting to remain in the EU. These include:

The cost of staying in the EU: £4,600 for every household

The cost of EU membership: £50 million every single day

The cost of EU membership: 250,000 EU immigrants every single year

‘David Cameron knows that not a single British family would lose that amount of money if we Vote Leave. In fact they would prosper as we spend our money on our priorities. Sadly, he failed to win even the most modest reforms to the EU in the renegotiation. He failed to keep his promise and make a positive case for the EU, choosing instead to do down Britain. Now he’s failing to be honest with hardworking families about the costs of the EU.

‘We hand £50 million to Brussels every day while EU regulations undermine our economy, democracy and borders. On 23 June it is safer to take control and Vote Leave.’ 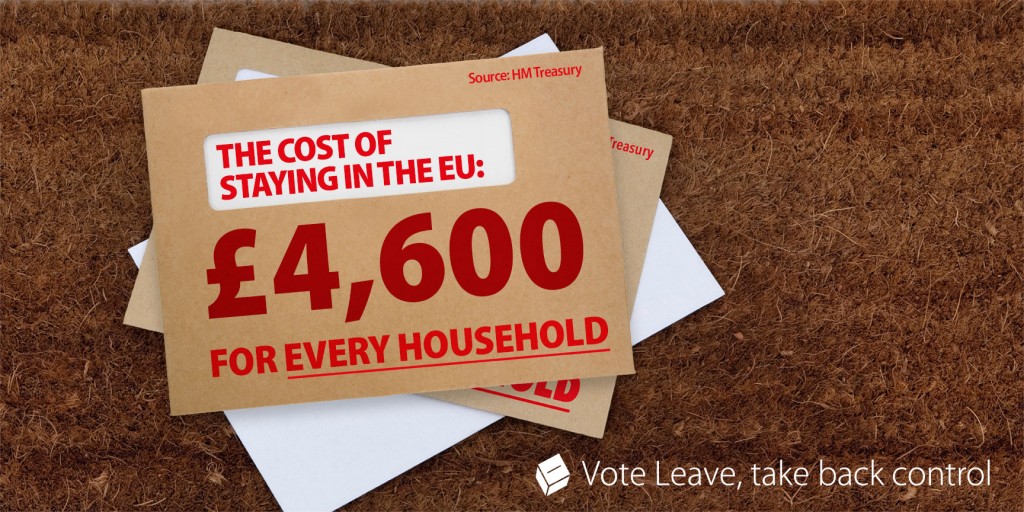 The cost of staying in the EU: £4,600 for every household (Source: HM Treasury)

In 2005, HM Treasury admitted that: ‘although Europe’s founders aimed to remove barriers and reap the benefits of expanded markets internally, they also sought protection and special treatment for particular aspects of their economies such as agriculture. This has brought costs: expensive subsidies still remain in some sectors and it is estimated that barriers to external trade and investment – such as tariffs, quotas and unjustifiably restrictive standards – could cost Europe’s consumers up to 7 per cent of EU GDP’. 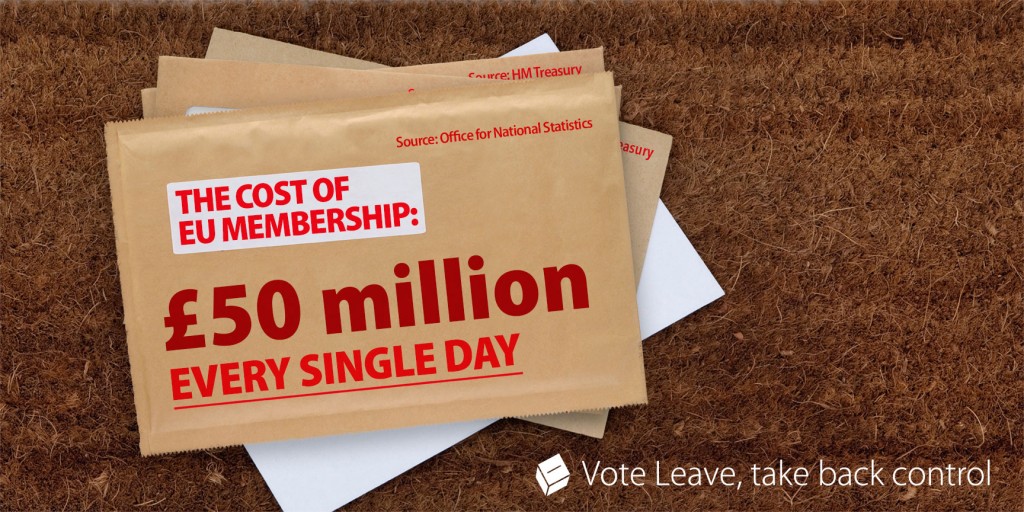 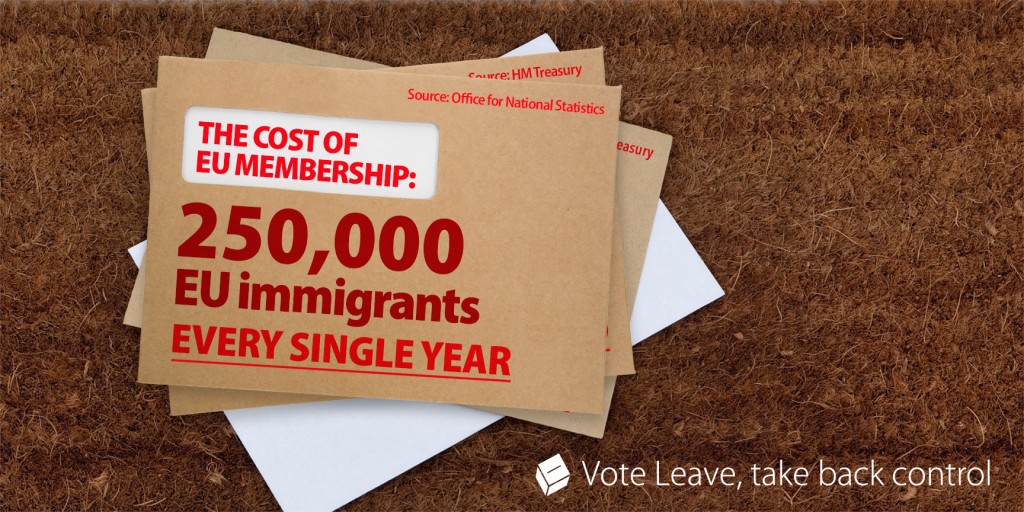 This is equivalent to a city the size of Newcastle, Plymouth, or Wolverhampton.

The Government and BSE’s £4,300 figure is bogus

The Government calculates the £4,300 figure by dividing a putative 6% lesser increase in GDP growth by 2030 by the current number of households.

The Government divides the putative lesser increase in GDP of 6.2% by the current number of households.

The report fails to consider the costs of EU regulation, which the Treasury has previously admitted are as high as 7% of GDP, or £4,638 per household.

The report does not quantify any potential savings of not having to apply EU regulation in the UK, but instead claims regulation would increase if we Vote Leave.

The report asserts that: ‘under any of the alternatives, the potential gains from additional flexibility on leaving the EU are likely to be significantly constrained, including because of domestic priorities and international obligations. These would be future government decisions. In any case, any potential gains from reduced EU regulatory burdens in specific areas would be significantly outweighed by the losses from the increased regulatory barriers and divergence from no longer being a member of the Single Market. Consistent with this assessment and the approach throughout this analysis, the modelling does not prejudge these decisions and no further assumptions on regulation are made over and above the increase in regulatory barriers that would emerge over time, as captured in the modelling of the effects of the alternative arrangements on trade and FDI’.

In 2005, HM Treasury admitted that: ‘although Europe’s founders aimed to remove barriers and reap the benefits of expanded markets internally, they also sought protection and special treatment for particular aspects of their economies such as agriculture. This has brought costs: expensive subsidies still remain in some sectors and it is estimated that barriers to external trade and investment – such as tariffs, quotas and unjustifiably restrictive standards – could cost Europe’s consumers up to 7 per cent of EU GDP’.

This is likely an underestimate, as the burden of EU regulation has increased. Open Europe‘s regular analysis of the cost of just the 100 most burdensome EU laws found in 2013 that the cost to the UK economy was £27.5 billion, but just a few months later had to uprate this to £33.3 billion.

The £4,300 figure is based on the Government breaking its promise to reduce net migration to the tens of thousands in every year of this Parliament.

The Government’s document states that: ‘The population and migration projections which underlie the modelling were used by the OBR in their Economic and fiscal outlook accompanying Budget 2016. It is assumed that population growth will slow in line with the ONS’s current principal population projections. In the principal projection, total net international migration to the UK falls from 329,000 per year in 2014 towards 185,000 per year from 2021 onwards’.

The OBR’s central forecast is that net migration will be in excess of the 100,000 target in every year of this Parliament, contrary to the Government’s manifesto.

The 2015 Conservative Manifesto pledged to ‘keep our ambition of delivering annual net migration in the tens of thousands, not the hundreds of thousands’.

In her speech to the 2015 Conservative Party conference in Manchester, the Home Secretary, Theresa May, said: ‘not all of the consequences can be managed, and doing so for many of them comes at a high price… But even if we could manage all the consequences of mass immigration, Britain does not need net migration in the hundreds of thousands every year… The evidence – from the OECD, the House of Lords Economic Affairs Committee and many academics – shows that while there are benefits of selective and controlled immigration, at best the net economic and fiscal effect of high immigration is close to zero.  So there is no case, in the national interest, for immigration of the scale we have experienced over the last decade. Neither is it true that, in the modern world, immigration is no longer possible to control… The numbers coming from Europe are unsustainable and the rules have to change’.

If there were 6% fewer households in 2030 due to lower immigration, there would be no reduction in household income at all (even assuming the Treasury are right that the economy would be 6.2% smaller in 2030 than it otherwise might have been).

This means that even if household numbers grow by more than 2.3 million in the next fifteen years, the Treasury is forecasting no reduction in household incomes.

The report does not consider the benefits of striking free trade deals.

The report assumes the UK would strike no new free trade deals if we Vote Leave, despite this being one of the principal economic benefits of leaving the EU.

In 2015, the aggregate GDP of all the countries with which the EU had a trade agreement in force was $7.7 trillion.

By contrast, the aggregate GDP of all countries with which Chile had trade agreements was $58.3 trillion. The figure for South Korea was $40.8 trillion and that for Switzerland was $39.8 trillion.

The report downplays the savings from the UK’s budget contributions.

The report admits that the contribution is a ‘significant economic obligation‘.

In 2014, (the last year for which data are available), the UK recorded a £12.3 billion balance of payments deficit with the EU institutions.

This is the net sum of money paid by the UK to the EU institutions in 2014. This money would be retained in the UK if we Vote Leave, cutting the current account deficit.

In addition, the UK would regain full control of the £19.1 billion we currently send to Brussels.