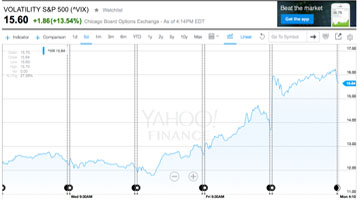 “The VIX reached its zenith on October 1 2008 after the Lehman Brothers collapse causing a global meltdown of enormous proportions. The VIX at this time of writing is now only at the 16.00 level therefore we have a long way to go until the fear levels get to 2008 heights.

“If China goes, we all go. That’s the way the cookie crumbles or shall we say the Ponzi house of cards. Don’t forget that the U.S. has Federal unfunded debt liabilities exceeding $127 Trillion and an active deficit increasing daily of $20 Trillion. That means each American citizen owes $250,000 of America’s public debt.

“In essence, there is no mathematical formula available that can solve the problem of America’s debt, and it is, as a country, destined to implode at some point in the future. The question is when and not if. We should be just as worried about the repercussions on the global economy of a dollar collapse and economic implosion in America as we should be worried about any BRICS nation,” economist Brandt Heidelberger, for the Institute of Economic Affairs in Geneva, Switzerland told CNN.

Buckle up for a shit sandwich.