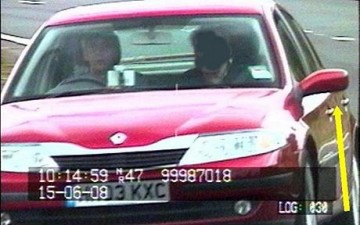 Consider this fact that all it will take for the criminals to get around the new licence plate recognition cameras filming you every day is to find a car with the same colour, make, model as their car, and clone the number plate. Criminals have been doing it for years with penalty points and getting away with it quite successfully.

If you’re an Eastern European over here (70% of the population of Britain) simply drive a vehicle registered in some back alley in some former Soviet bloc shite hole. Anyone from the EU who lives and works in Britain is not bound by the same laws as the rest of us prisoners. Anyone who has a vehicle registered in the EU has carte Blanche to do as they please on Britain’s roads, speeding, parking wherever they want and not paying road tax.

Every journey you do from now on will be meticulously tracked by the plate recognition cameras, and this is obviously a little test for the future where British citizens will have to pay to drive by the mile.

Thanks to the EU, Britain’s tiny narrow roads are now so overcrowded with traffic from the rest of Europe that on a good day if you get to your destination in less than four hours even though it’s three miles away is a good day.

Out of all the taxes, road tax is pretty useless any way, once paid by the over burdened taxpayer, it is meant to be used on the roads to fix the pot holes and maybe maintain them a little. Instead, the money from your road tax is diverted to other governmental departments, you know like the surveillance department or Whitehall Christmas party planning budget. Who the fuck knows?

Nevermind, soon the roads will be filled with driverless cars with the rest of the rabble, so pay your road tax like a good chappie and keep biting your lip with your mouth firmly shut and your foot pressed hard on the accelerator peddle as you steam through another checkpoint.