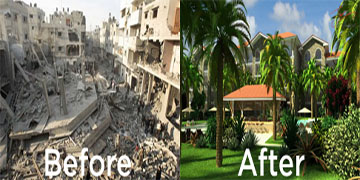 Real estate companies in Tel Aviv are licking their lips at the Gaza strip demolition in process at the moment.

Moshe Levisteinski, owner of Kazar Properties, told the Jerusalem Post: “You don’t get opportunities like this. I’m licking my lips right now at the money I’m going to make. The demolition is already done, we just need to clear the bones and rotting carcasses away, put them in incinerators then we move in. I have my architects working on it right now, some condos, a riverside location, golf club. It’s great that the world and Arab scum are sitting by doing nothing, obviously too scared eh. Well, thank you, thank you, I’m going to be richer than I imagined. Please fire more rockets so we can take more land you dumb Palestinian animals.”

Another Israeli citizen, Abe Winkleberg, wrote on his blog: “These missiles cost money, every time we shoot down one of their fireworks, one Iron Dome missile costs as much as $100,000 for each shot, compare that to the cost of a Palestinian firework at about $60. They’re trying to bankrupt us.”

The property market is booming in Israel as the daily influx of people who call themselves Jews arrive daily.

“Israel is not populated by real Jews any more, it hasn’t been for a very long time. These are mostly Khazari people (semi-nomadic Turkic people), Ashkenazi from Eastern Europe and Russia who converted to Judaism only a few hundred years ago. Their DNA is not Jewish, but their faith is, therefore they can live in Israel so that’s okay. Ninety percent of Israelis do not have Jewish DNA and the original Israelites are all pretty much a long distant memory in modern Israel. In fact, the Palestinians today, hold more Semitic genetic similarity to the original Israelites than the people living in Israel who call themselves Jews,” a bemused man from Jerusalem said before being arrested for heresy.