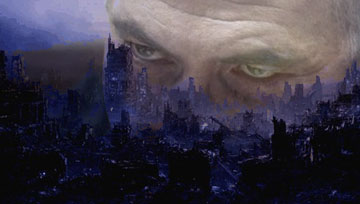 One must look at history and the present to understand the intricacies of such an irrational imbroglio meted upon this turbulent region.

The Jews are the ‘chosen people’ as defined by the religious books written thousands of years ago assimilated from Babylonian texts and therefore they say they have the right to rule over the goyim.

They are cleverer than you, look at all the institutions, the technology  and scientific companies, the media, finance, the entertainment companies, the systems in place today are all from Jewish minds. Financially and technically, the Jewish mind works steps ahead of the others, cunning and very adept at whatever field they work in.

You always know who is really in charge because those are the people you cannot say a word against, and it is with this technique Jews coined the phrase anti-Semitism. Any form of critique against a person who has Jewish heritage is immediately pounced upon, denounced, then silenced. If you run a business or are employed by anyone, you can rest assured your days are numbered after any critical utterance. Of course, other races or creeds or religions do not have that supreme protection, and are fair game.

History repeats itself in interesting ways, as the Nazis created ghettos for the Jews in World War II, so Israel created ghettos for the Palestinians, who in Israeli eyes are deemed as Untermenschen. The lesser human (Palestinian) must therefore receive the wrath of Israel as it has the perceived God given right to exist. The Palestinians, however, do not see this and proclaim that Israel does not have a right to exist. This stalwart hatred by both sides is something that cannot be remedied by anything other than complete violence and war. And so, war it shall have to be, and this war will be against a highly financed, trained enemy who will crush the Palestinians with no pity or remorse, such is the wrath unleashed.

The Holocaust was indeed a horrific brutal genocide on the European Jews, and this is why Israel was created on the ancient lands, granted by the British, populated by many different people. What Hitler saw in the future, scared him and his adjutants but was rightly so thwarted. It is to this end that the nomadic Jews, who are very well versed in travel and assimilation created their homeland over the bones of others.

But at what cost?