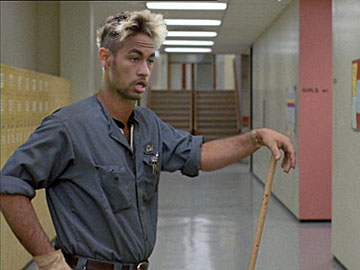 Neymar passes the bucket, then parries a mop as Fred shoots over some detergent, but misses splashing it all over the principal’s prize carpet.

It’s just another term at Jao Da Silva High School where the kids throw paper planes and rotten tomatoes at the former footballers.

“If they see one mopping the floor some kids make sure they make an even bigger mess. I know it’s cruel but these guys need to work for a living, so they’re earning what we pay them,” Pedro De Santos, one of the teachers at the school revealed.

It’s just another day in the life of the former Brazilian football team, as for former manager, Scolari, he can count his lucky stars he is now employed in the municipal dump as part of the waste disposal team.