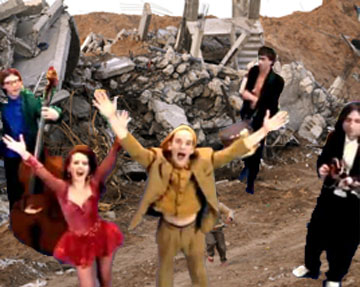 “The band wanted to cheer the people of Gaza up, you know with all that murder going on. They’re just going to sing the song ‘Shiny Happy People’ on a constant loop, and if they don’t get themselves sniped or blown up, then they will try to fly home again after the concert,” Scott Leiken, the bands manager revealed.

United States fans of the band have been warned by the State Department not to go to Gaza, but they can go to one of the 200 ft walls separating the two areas within Israel where they may get to hear the band playing over the gunshots and artillery fire.

The R.E.M concert will commence at 19.00 GMT 31 July in the Khan Yunis rubble pile, next to a big mound of rubble and several craters.

Palestinians who attend the concert may be shot or blown up and the band are not responsible for any injuries from artillery fire.