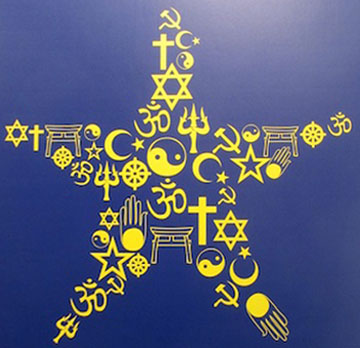 The Founding Father of the EU Jean Monnet once said:

”Europe’s nations should be guided towards the superstate without their people understanding what is happening. This can be accomplished by successive steps, each disguised as having an economic purpose but which will irreversibly lead to federation”

And it is to this end that France has dug its own grave, by creating an EU monster, the duped masses are now fighting a second revolution. The controlling elites underestimated the power of the people once again, as they are revolting against the superstate behemoth of the EU with its dictatorial edicts.

The Eurovision contest is a good metre to EU sentiment, and this time France got 3 points. France has disobeyed many orders and was punished duly by the EU controlling board, even in an inconsequential song contest not fit for purpose. This sort of vindictive behaviour is childish but belies a deeper totalitarian spirit within the EU, which dictates its message of conformity to every strata of society and politics.

The EU is now like a religion, almost akin to Islam, where it encapsulates all elements of existence and those who do not adhere to its stringent rules are vilified, persecuted and penalized.

Marine Le Pen, head of France’s far-right National Front is the Joan D’Arc risen like a phoenix to ‘save’ her country from becoming a simple faceless district. The EU’s future is one of horror for the masses who were duped into joining a totalitarian technical entity that will kill individualism completely and eventually abolish ownership of all property for the masses. To be a federal superstate, there will need to be crisis after crisis dealt out by the elites; who is to say that there will not be another holocaust in Europe, with all the chess pieces falling into place right now?

What people do not realise is that the antithesis of EU communo-fascist technical rule is pure Fascism, which Le Pen is extolling. French history post-revolution was one of socialism, Marine Le Pen, is a National Socialist, and her brand of political ideology is borne out of economic discontent, wherein the immigrants and foreigners are blamed for the country’s many problems.

The EU wishes to remove Nationalism completely, this will naturally create a backlash because the people are brainwashed from youth to be patriotic and jingoistic. Ideally the EU would also remove all religion eventually, and instil allegiance to only the EU god.

Whatever happens, the EU will win, either through economic assimilation or if it comes down to it military means. The EU will not be halted in its mission and there is nothing anyone can do to stop this juggernaut ploughing through its policies onto the insignificant populace.

Russia has already rediscovered its soviet roots, and its eyes look West. We may very well have another fight to rebalance the weights of global hegemony.