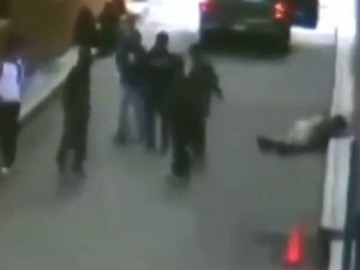 As always, when every new craze jumps over an ocean or enters a new territory it gets re-branded.

During the lovely Labour era in the UK circa 2008, we had the ‘happy slapping‘ event when young people would go around terrorising commuters or anyone else they found on a street alone. The gangs would then knock the person out or slap them really hard in the face whilst filming the deed later posting it on the internet for extra brownie points.

The Labour era championed this subclass of track suited yobbos who were alternatively known as chavs.

The Americans are currently enjoying their own socialist renaissance with marauding cowardly gangs of a similar low-level species as the British model, who enjoy nothing more than a bout of ‘flash mob robs‘ or ‘knockout’.

The code word in the terribly PC American media is ‘young people’ or ‘teens’ because they’re not allowed to mention the race of the  people committing the ‘knockout’ craze. This is possibly due to the fact that president Obama has a very tight grip on the media and no one dares even say the ‘b’ word.

Under any socialist regime political correctness is a weapon used to condition people into controlled thought processes and also to deter anyone from mentioning the truth about any situation. The current American regime is not ‘Democrat’ or ‘Liberal’ this is a false moniker for a party that is deeply socialist, Marxist, bordering on full blown communism. The collectivist, anti-privacy, mass censorship, surveillance policies of president Obama are an affront to freedom everywhere in the world, not only in America.