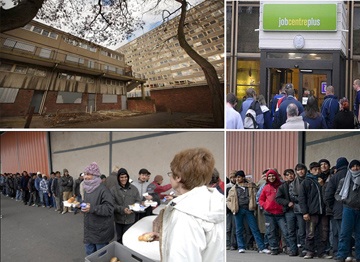 With the demise of the National Health Service when millions of  Bulgarians and Romanians descend on Britain in January 2014, Britons will also have to contend with a given  certainty in 2015 when the General Election will be held.

The Labour win will cause unimaginable pain and suffering to Britain, as the champagne socialist cronies get hold of budgets once again for their self serving pet projects. Borrowing will increase tenfold and plunge Britain into a new Dark Age. Naturally, it is hard to conceive more surveillance as there is enough now, but Labour will increase it to impossible depths. Crime will increase as it did with the previous Labour government as the populations will be plunged into the cauldron of an incompetent government who champion criminals and send murderous thugs on taxpayer funded safari trips. Ed Miliband will also strip the population of  riches via punitive taxation to pay for everything, so prepare to work for nothing and get nothing back, such is his anti-business anti-profit stance.

As for American companies like Google, Amazon, Starbucks and Ebay they will be taxed to such levels that invariably they will not want to do business in the UK, leaving these shores and taking their business elsewhere. France under Hollande is a good example, although under Labour the levels of taxation will be multiplied a thousand times.

Britons deserve what they vote for and they will get it in 2015.

“Right now, Britain is barely functioning under the strain of immense migratory pushes from the EU, but once Labour gets in it will only get worse as their pro-EU stance will ensure further seepage of  the Marxist Communist EU state.” a Westminster insider revealed to the New Statesman today.

Ordinary Britons will see thousands more A&E units forced to shut and buckle under the strain of immigration. They will also witness class sizes in schools increase to over 60 with just one teacher. They will also witness the death of Britain’s infamous benefits system which will have to shut down permanently due to impossible demand, increased unemployment and no resources.

Once the Labour government is installed, the pound sterling will be scrapped for the euro. This is their ultimate goal, and will cause havoc in the banking sector. No doubt they will smile as all financial institutions flee from Britain to sunnier climes as the anti-finance regulations kick in.

Being anti mass immigration is not racist, this is not about race or xenophobia, this is about space. Something which the tiny island of Britain has very little.

“When Labour wins in 2015, you will have one person to congratulate for the win and that will be David Cameron. His flip flopping over Europe will cost him dearly, because his actions will condemn the UK to be obsolete. But why would he care anyway when he gets his nice role in Brussels?” an ex Tory voter revealed today.

To divide and conquer Britain utilising economic and migratory weapons is the sole purpose of the EU and this has proven to be an extremely efficient method of  integration. In any conquest, one must first destroy, then build back up in the vision of the conqueror.

The EU will win this war any way they can.