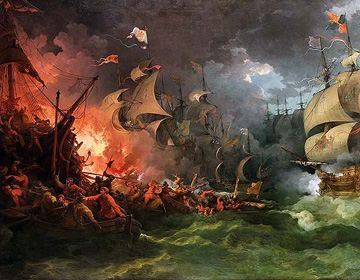 British PM David Cameron, in his defining Maggie moment, wants to send a British Navy dinghy to Gibraltar to stave off the Spanish Armada.

“I’ve sold off and decommissioned all of our Navy warships so we’re going to send in a rubber dinghy. That should do the job,” Cameron told the House of Commons today.

Deputy Prime Minister Nick Clegg backed up Cameron’s speech with one of his own: “I know I have the mind of a weak, feeble woman; and I have the heart and stomach of a weasel, and think foul scorn that Parma or Spain, or any prince of Europe, should dare to invade the borders of our realm; to which, rather than any dishonour should grow by me. Oh dear, I forgot wifey is Spanish. Ah, let them have Gibraltar, it’s only a tiny rock you know. Just changed my mind again, please ignore what I said before.”

Spain which hails under the orders of the EU has been chosen to bait the Brits as a warning for not going ahead with a full EU membership.

In Brussels, unelected technocrats were unapologetic: “Ve haf vays of making the Britishers play ball. Until zay give us all of their island, ve vill bait them in Gibraltar. That piece of land is ze property of ze EU. They have no right to be there any more.”